A first EVA simulation with the APM analog spacesuit

Friday March the 14 th, the Planète Mars association (APM), Mars Society French chapter, conducted its first EVA (Extra vehicular Activity) simulation on the field in the lower part of « Black Cows » clay cliffs in Normandy. Planète Mars association owns now two analog spacesuits elaborated by two association members Armande Zamora and Patrick Sibon in 2012. The aim of an analog space suit is to reproduce as much as possible the difficulties of conducting operations in an actual spacesuit.

The 14th of March EVA program featured four phases : The Mars flag (red, blue green) deployment, a demonstration of dexterity using devices stored on the gloves to change cameras batteries and card, the detection of fossils followed by photos, moulds and sampling, and a similar operation on a slope, the experimenter being tethered. The EVA lasted one hour and a half in a Martian dust storm like environment (the foggy weather which lasted all day on the Normandy coast). A video was shot by Gargouille Productions. 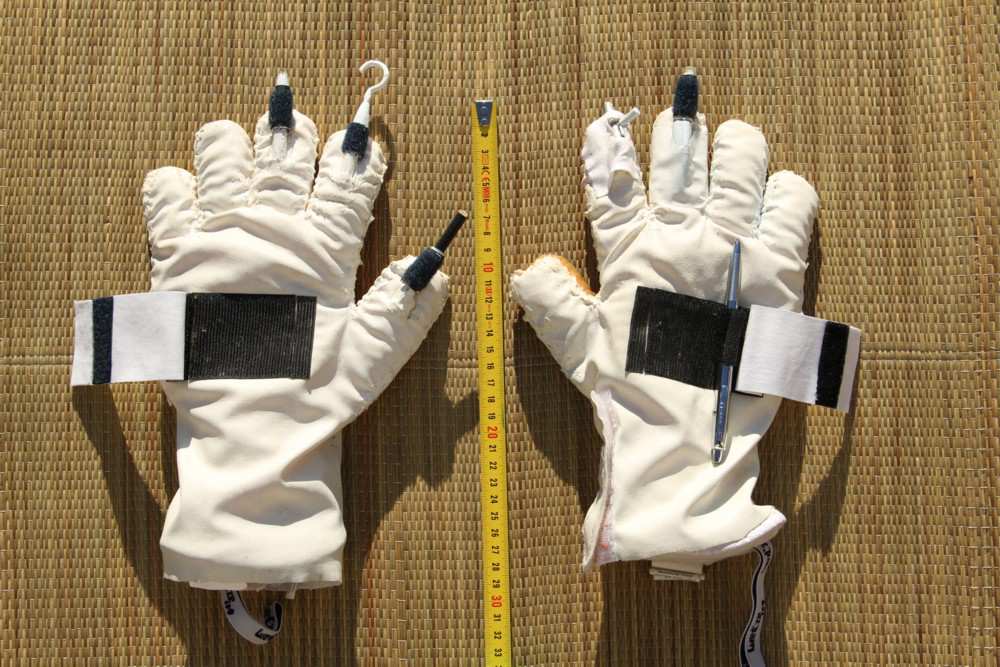 Dexterity improvement tools are strapped by Velcro on the gloves upper part and secured by a flapalso closed by Velcro. These tools are used on some of the finger tips when needed. A Space Pen isalso stored and used to write indications such as time and space suit internal temperature. (Doc. A. Souchier) 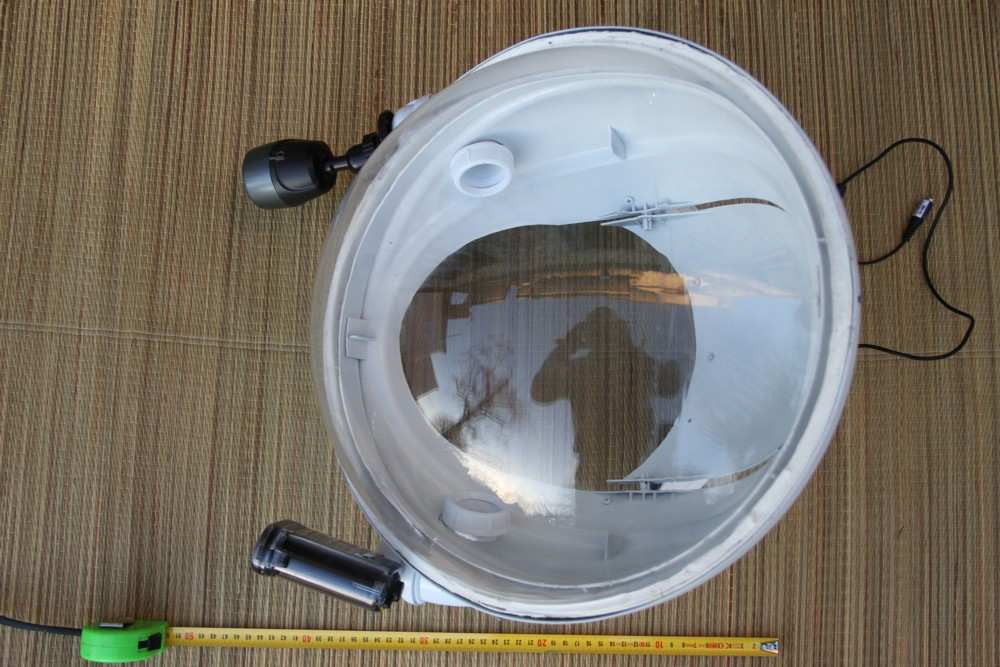 The helmet is equipped on the left with a HD 170° field of view camera and on the right with another camera transmitting in real time to a monitor (doc. A.Souchier) 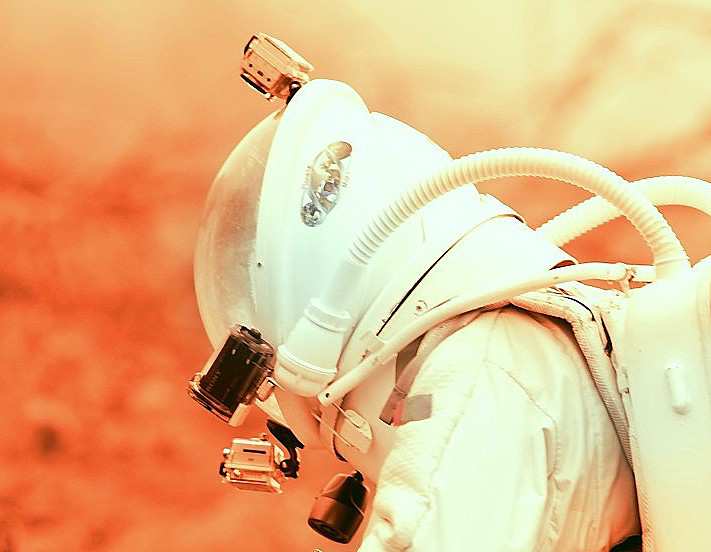 Two Go Pro cameras were added for the EVA to the two previous ones, one above the helmet and
one under. (Doc. Gargouille Productions/I. Ebran) 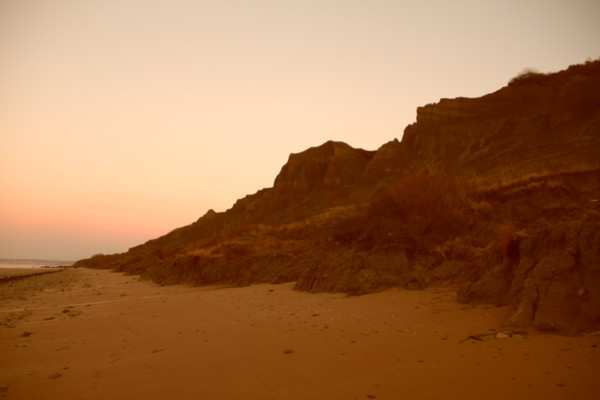 A pathfinder survey was conducted the 14th of January to find the EVA best location. (Doc. A.
Souchier) 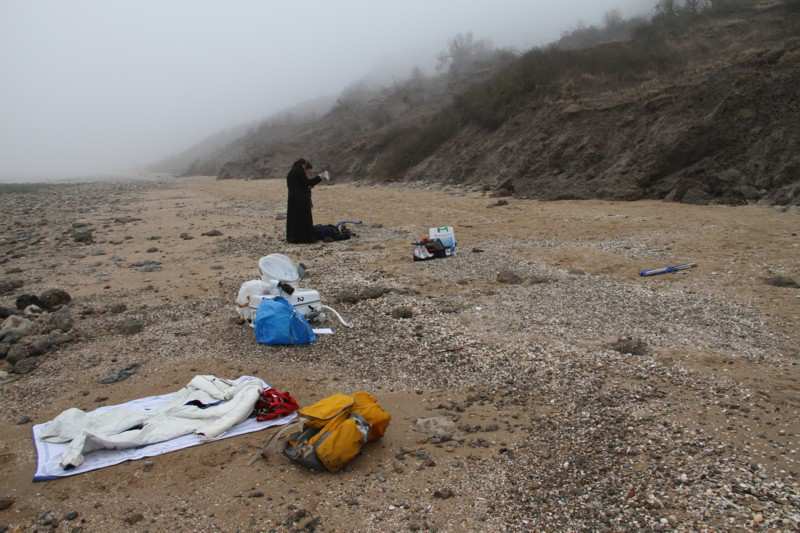 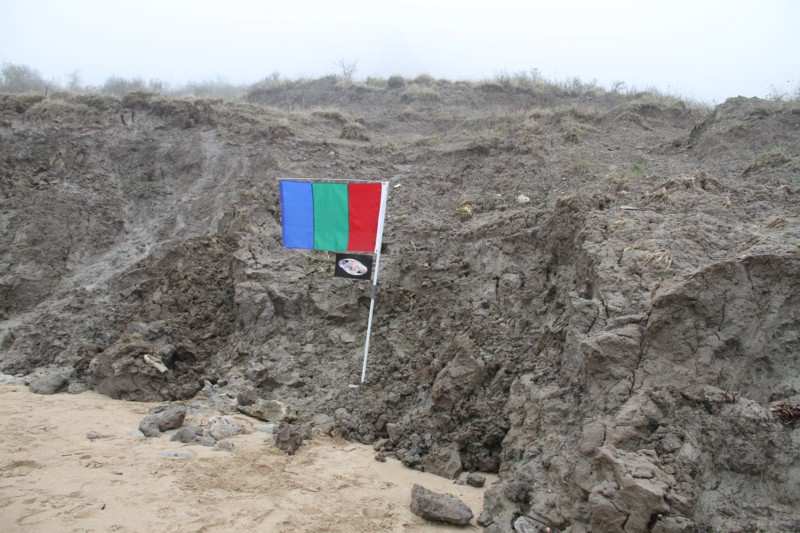 The flag is deployed. This photo was taken « in sim » with the thick gloves and the helmet reducing
the camera field of view visibility. (Doc. A.souchier) 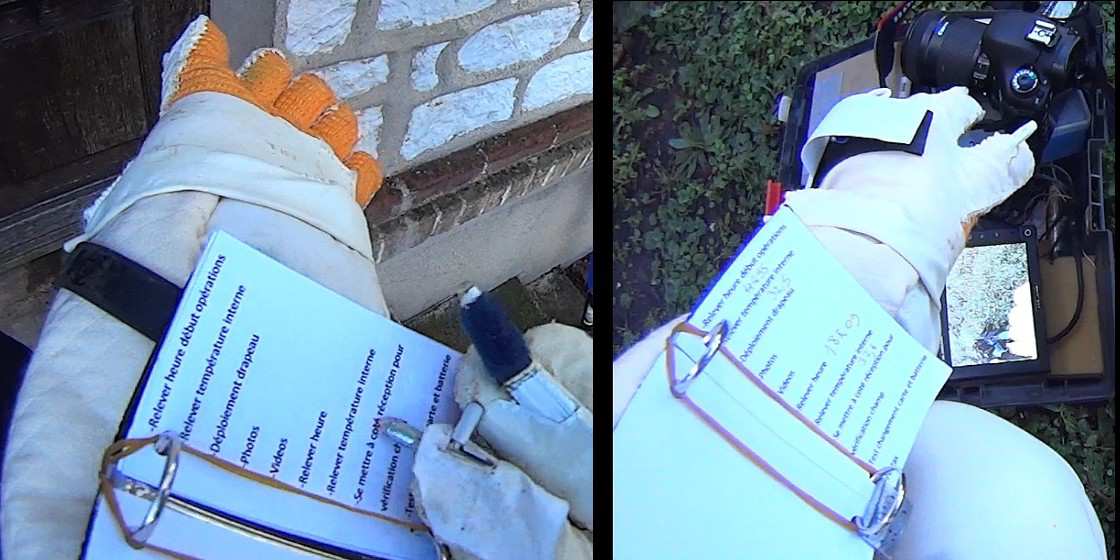 The operations check list, Black Cows fossils description, and area photographic maps are located in a booklet (as for the Apollo missions) on the left arm. These pictures are extracted from the HD camera and were taken during a rehearsal the 3 rd of March. On the right photo the monitor with the picture transmitted in real time from the right helmet camera may be seen. (Doc. A. Souchier) Hand writing 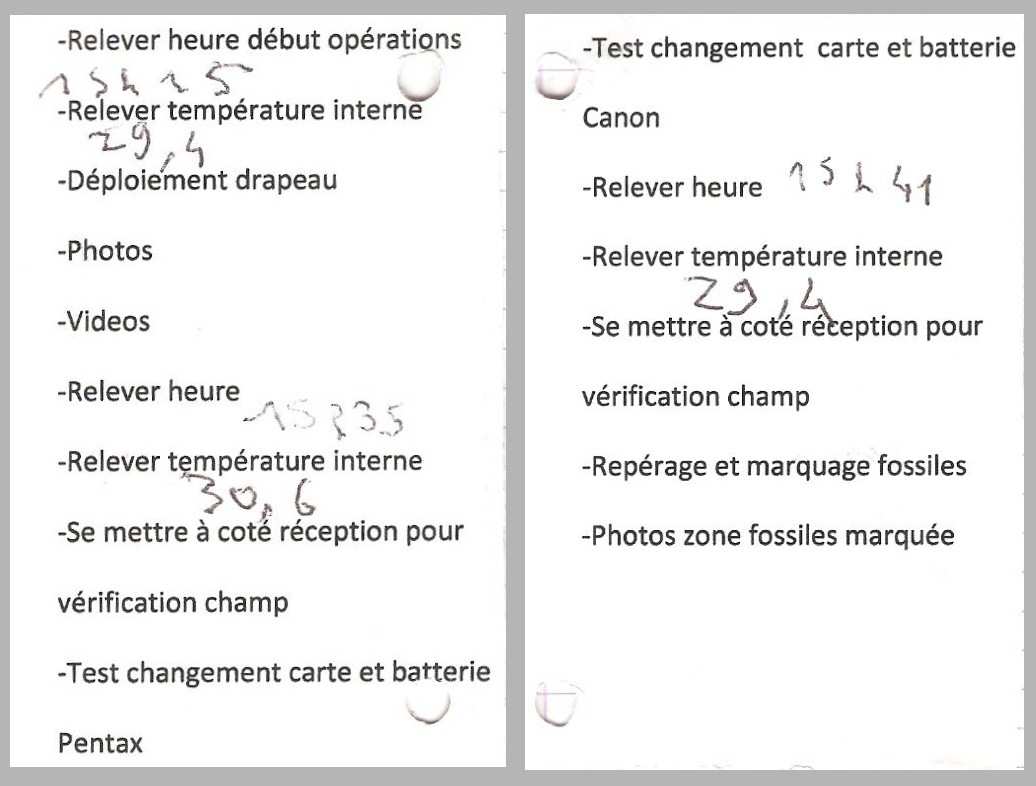 Hand writing with the gloves is not so easy (doc. A. Souchier) 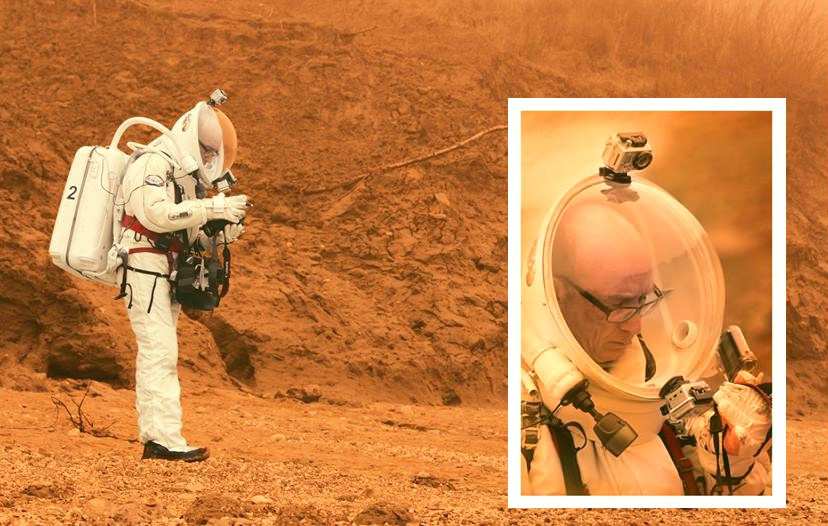 After the flag deployment the operations second phase was the demonstration of capability to change cameras batteries and cards (doc. Gargouille Productions/I. Ebran) 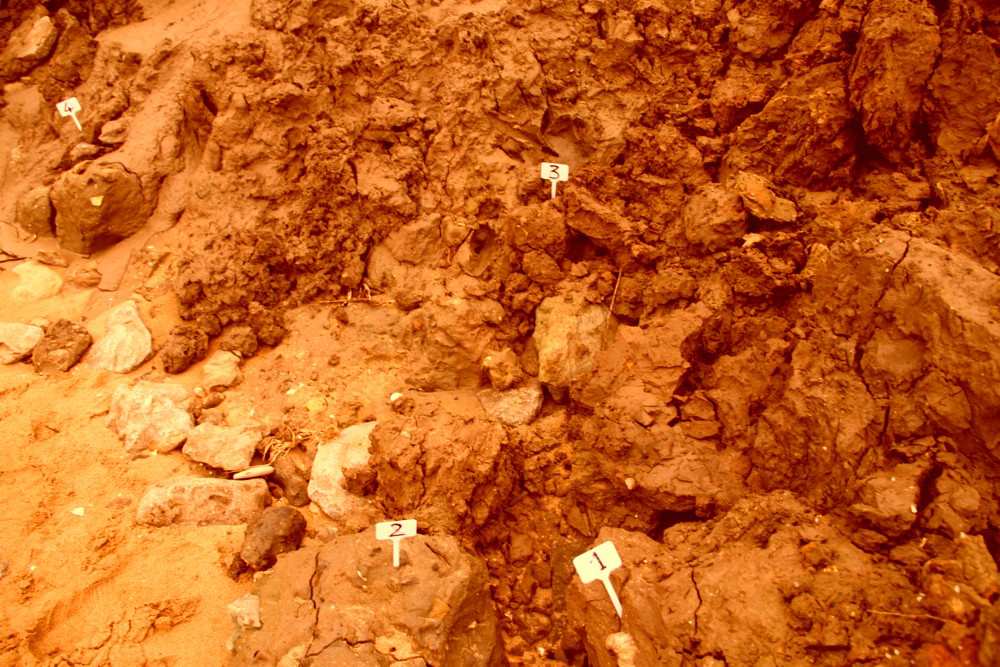 Operations third phase: fossils detection and characterization. The fossils are only used to demonstrate detection and characterization capabilities. The most optimistic scenarios about a possible life apparition on Mars do not include the possibility that such elaborated fossils may exist. On Earth it took 3.5 billion years of favorable conditions for life to reach this evolved state. Photo taken “in sim”. (Doc. A. Souchier) 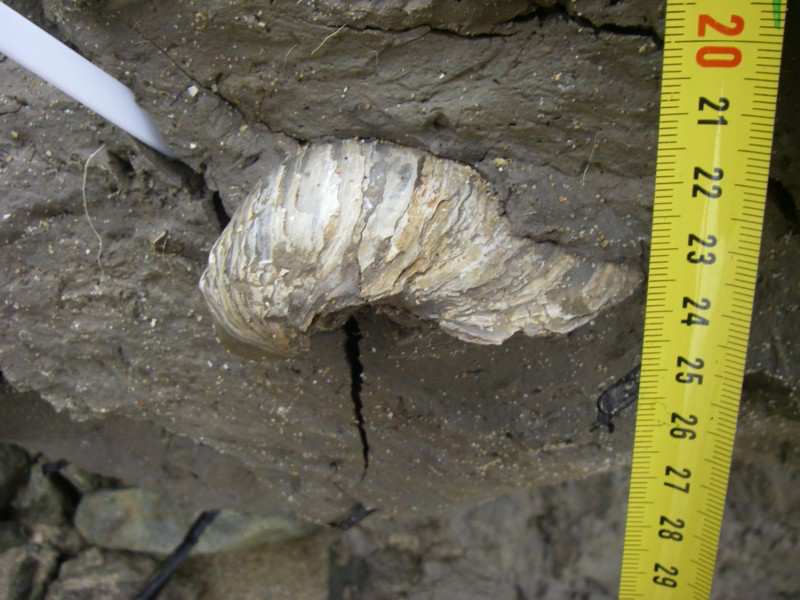 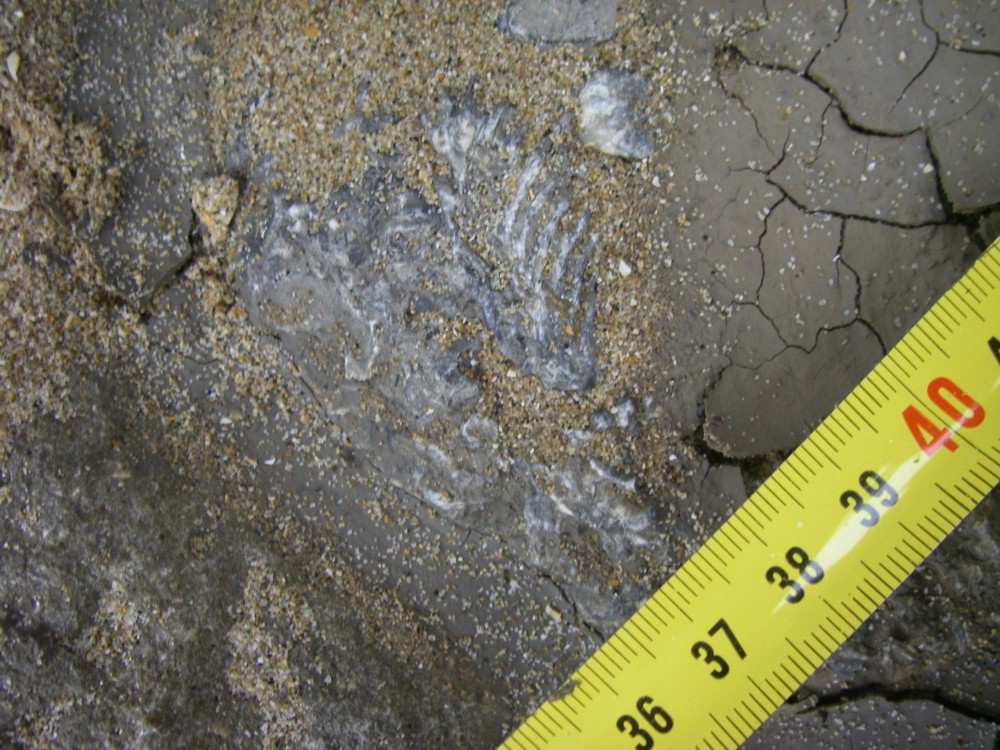 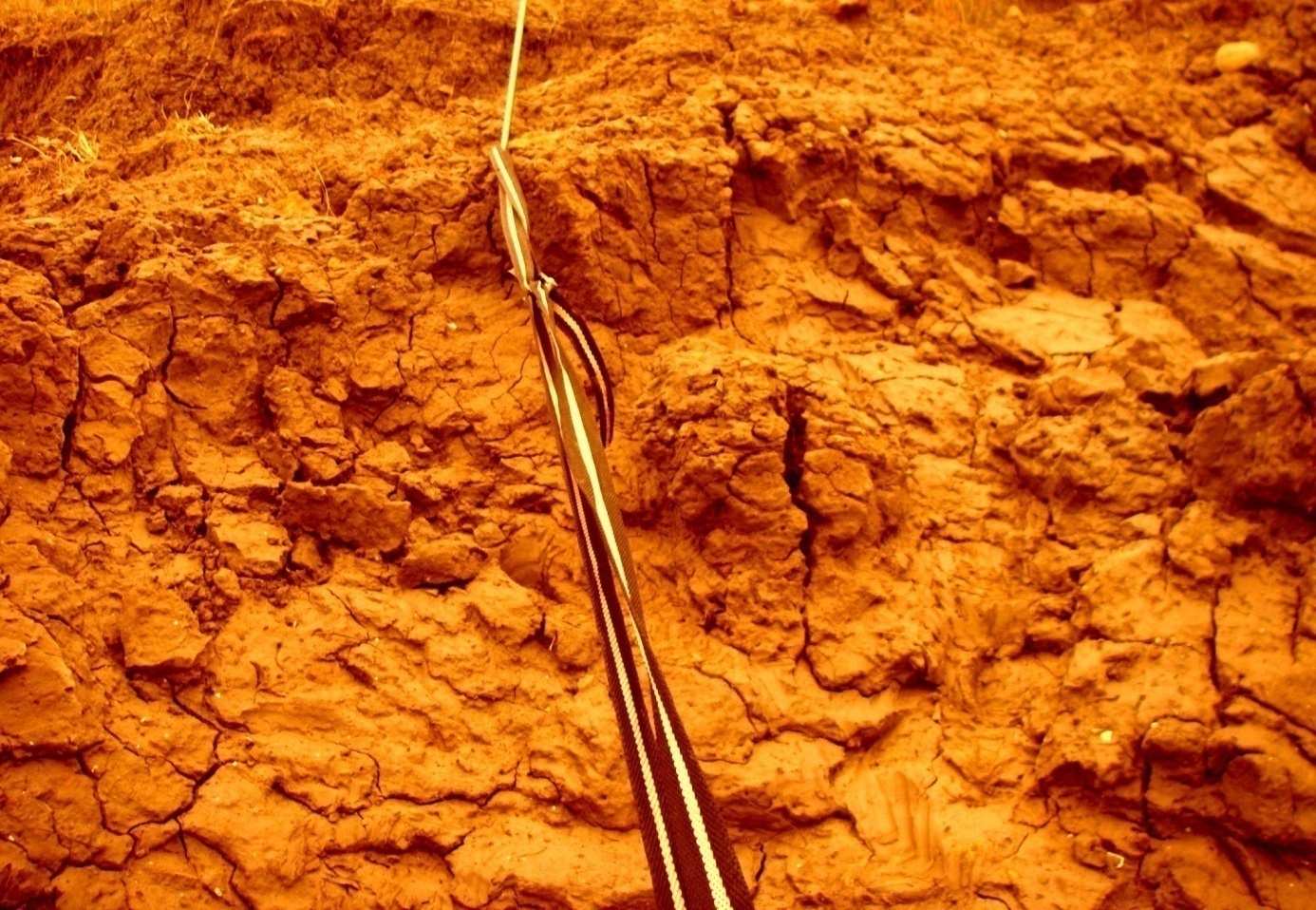 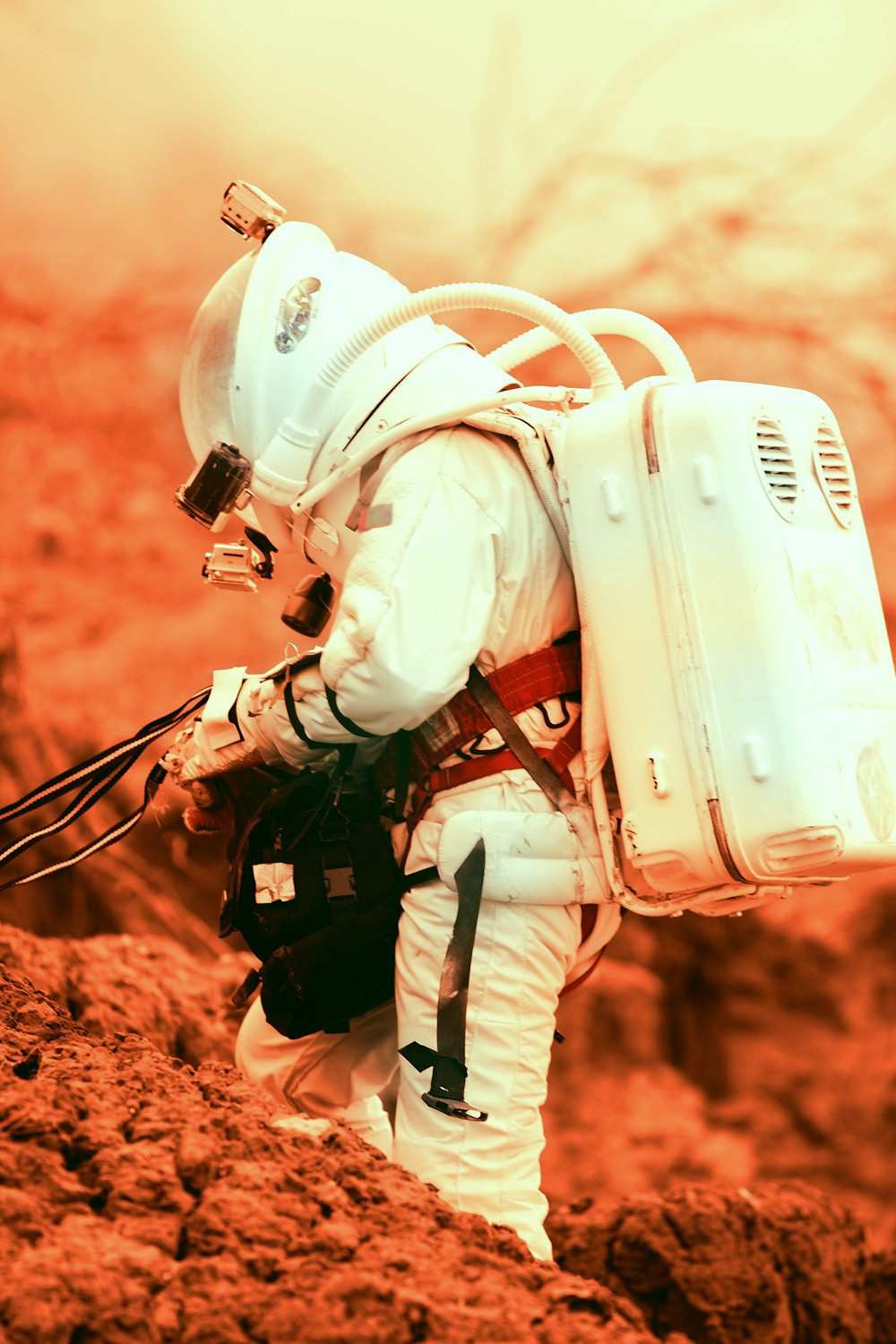 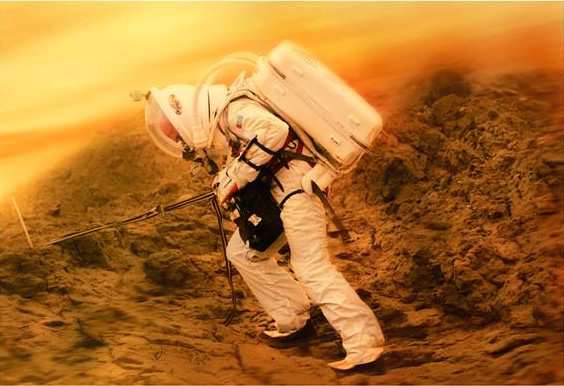