One might think that the launcher architecture does not directly impact the design of the shuttle, but this is not the case. The single core configuration does in fact necessarily implies that the ship be at the top of the rocket (above the second stage). As a result, the aerodynamic shape of the latter should not have a significant bearing surface, which would force making the rocket too unstable to remain controllable. The monstrous tail surfaces that the designers of the DynaSoar project had to provide their launcher with in order to stabilize it, is an interesting illustration of this problem! 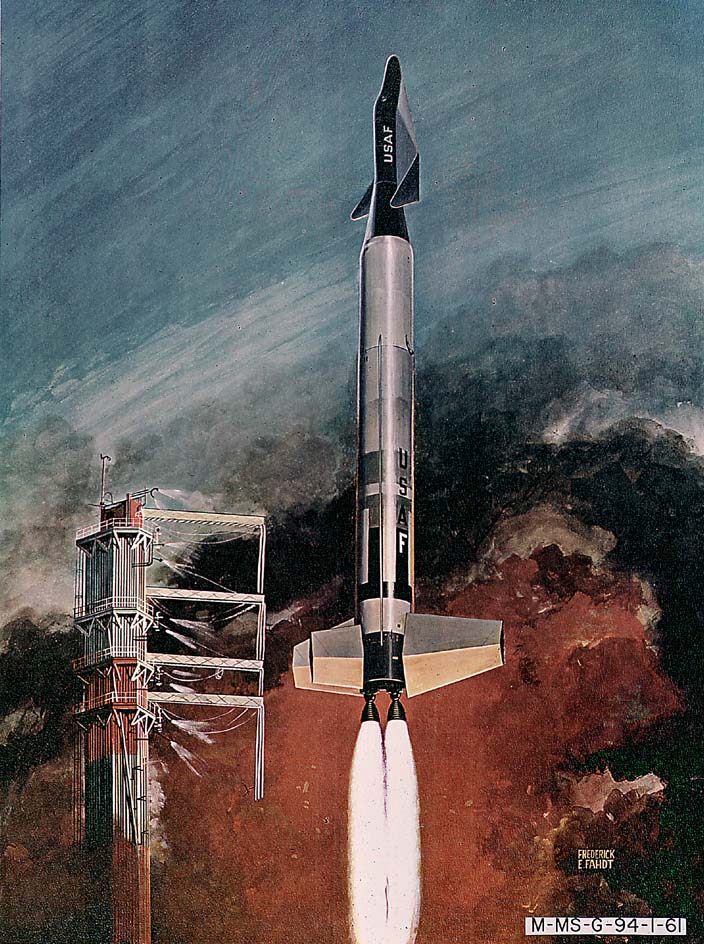 Artist rendition of a Dyna-Soar launch.

This constraint will result in a severe limitation in terms of reducing the ballistic coefficient (Mass / (CxSurface)), detrimental in terms of the moderation of flows and loads on the thermal protection that is to be fully reusable and, especially in terms of atmospheric deceleration ability, leading to an increase in the mass of propellant dedicated to the final braking.

The large mass of the shuttle during the Martian atmosphere entry phase (over 200 tons), prohibits a capsule shape, which should be equipped with an oversized shield. Nor could a capsule provide the minimum volume to accommodate 100 passengers (the absolute minimum per person is estimated at 10 m3). This leads us to retain a cylindroconical lifting body formula, close to that considered for DRA5, with a diameter (12 m) and a length (39 m) allowing lodging passengers, tanks and a cargo bay.

In this version of a single core launcher, we chose as the only option for the return trip the “conjunction” scenario trajectory, in a Hohmann mode (with a payload limited to 5 tons). However, the choice of this scenario implies that the shuttle will have to stay 18 months on the surface of Mars before taking off for the return leg of the trip, and that, therefore, it will not be available for the launch window following its own; in other words it would only be used once every 52 months! This is not consistent with the ambitions of the SpaceX management, for whom the MCT must eventually induce a commercial business … That is why, in the section dedicated to the multi core version, we will discuss the possibility of an immediate take-off after landing, for a return in an “opposition” mode, even though it would be more expensive as far as the propellant mass (and takeoff mass) is concerned. We will see that, in this case, it is the return leg which constrains the size of the shuttle tanks.

But in the present case, it is the outward leg that constrains the sizing. This is explained by the fact that (incidentally in both cases) the analysis of the performances and of the launch vehicle recovery capabilities, leads to assign to the shuttle itself the burden of supplying the ΔV injection for the Earth to Mars transfer orbit, but also the final propulsion effort for reaching the parking orbit (on LEO). To this end, we put aside a propellant mass of 400 tons; this facilitates the return of the burnt stages to the Earth surface, in particular by limiting the speed at the end of the combustion of the second stage.

As far as the propulsion of the ship is concerned, we kept the ventral engine option only, with a “flat” Martian landing and take-off. Taking into account the presence of these engines and the limitations of winged area, it is possible to consider a final terrestrial landing not in a gliding mode but in a propelled “helicopter” (hovering) mode (which also allows to lighten the landing gear).

Taking into account the shape constraints, the necessity to minimize the ballistic coefficient which a priori is a disadvantage in this configuration, the different volumes to lodge into the shuttle (at least 1500 m3 for the passengers) and the resulting centering balance problems, we devised a layout project. Further, extrapolating the data estimated in the previous study, we devised a mass estimate that we checked by computing the masses of propellant needed to provide all the propulsive maneuvers of the outward leg (final LEO injection, transfer injection, maneuvering in the Martian environment, final braking during EDL).

It turns out that the payload should be reduced to 95 T (Mars at perihelion)..

Features of the shuttle for a single core launcher version 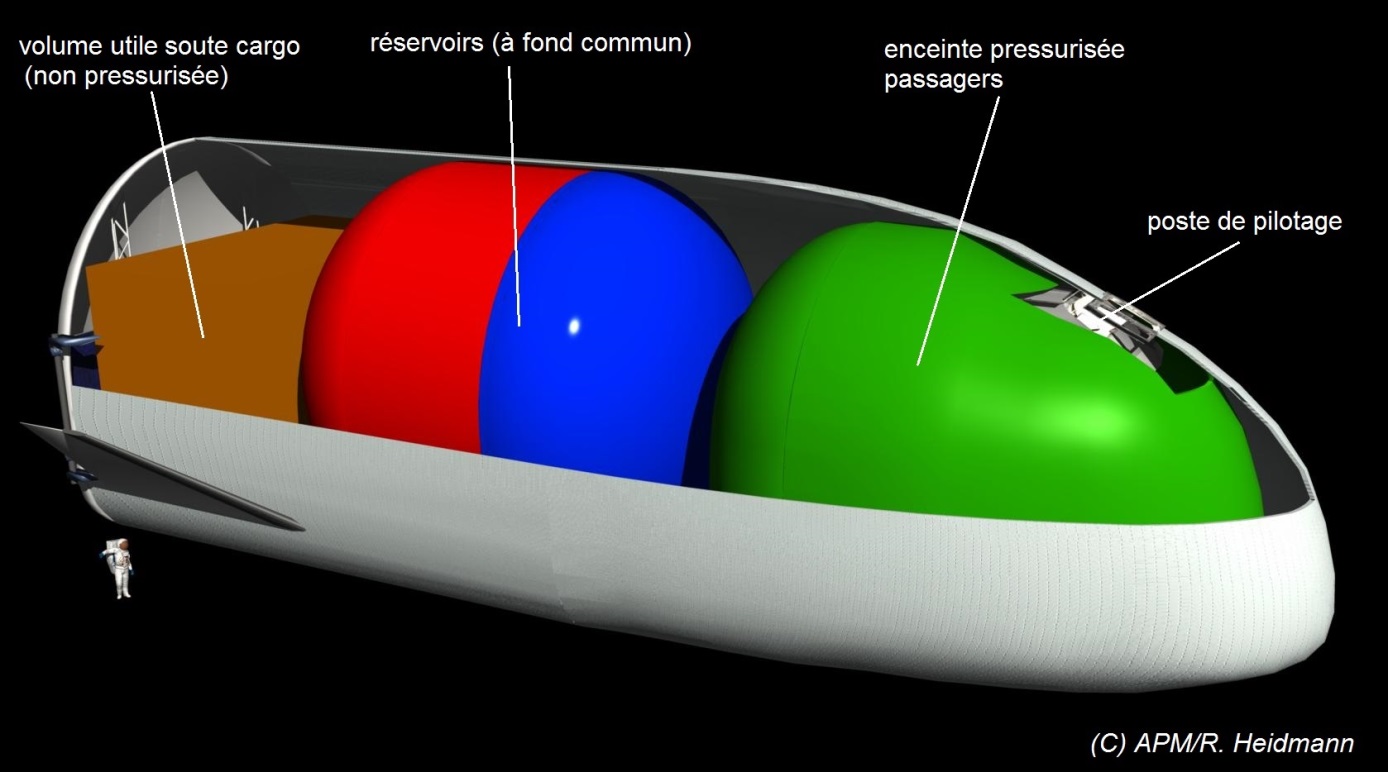 The required performance in LEO is 631 tons tons (with contribution of the shuttle propellant). Warning: this may be achieved only in the most favorable conditions of transfer:

It seems right, for the purpose of this feasibility study, not to consider tougher assumptions aiming at shortening the travel time; a 6 months trip would require an additional ΔV of 880 m/s which would cut the payload, all things being equal, down to just over 60 tons… Since we are speaking of a “mass” transport scenario of passengers, we may assume that the interior design will allow a level of protection against radiations resulting in individual doses consistent with that which their long stay on Mars will make them endure anyway.

This being said, it is necessary to consider performing a launch at each window, even in the worst case, when Mars is, upon arrival, near its aphelion. In this latter case, computation shows that the payload goes from 95 tons down to 80 tons.

The 225 tons mass at EDL entry induces (in a hypersonic mode and a high-incidence, Cx = 0.8)) a ballistic coefficient of the order of 600 kg/m², that is to say of the same order as that of the Space Shuttle. This is not a good result; we will see that, in this respect, the multi core version is to be preferred.

Tanks capacity must reach 846 tons (sum of the outward trip items). This large quantity contributes to the choice of a 12 m diameter (which will also be that of the second stage of the launcher), knowing that, in order to ensure a good emptying within the non axial propulsion configuration chosen, nearly spherical tanks are preferable.

The interface with the launcher allowing, it would be interesting to flatten the (hot) belly of the shuttle, so as to increase the effective braking surface. 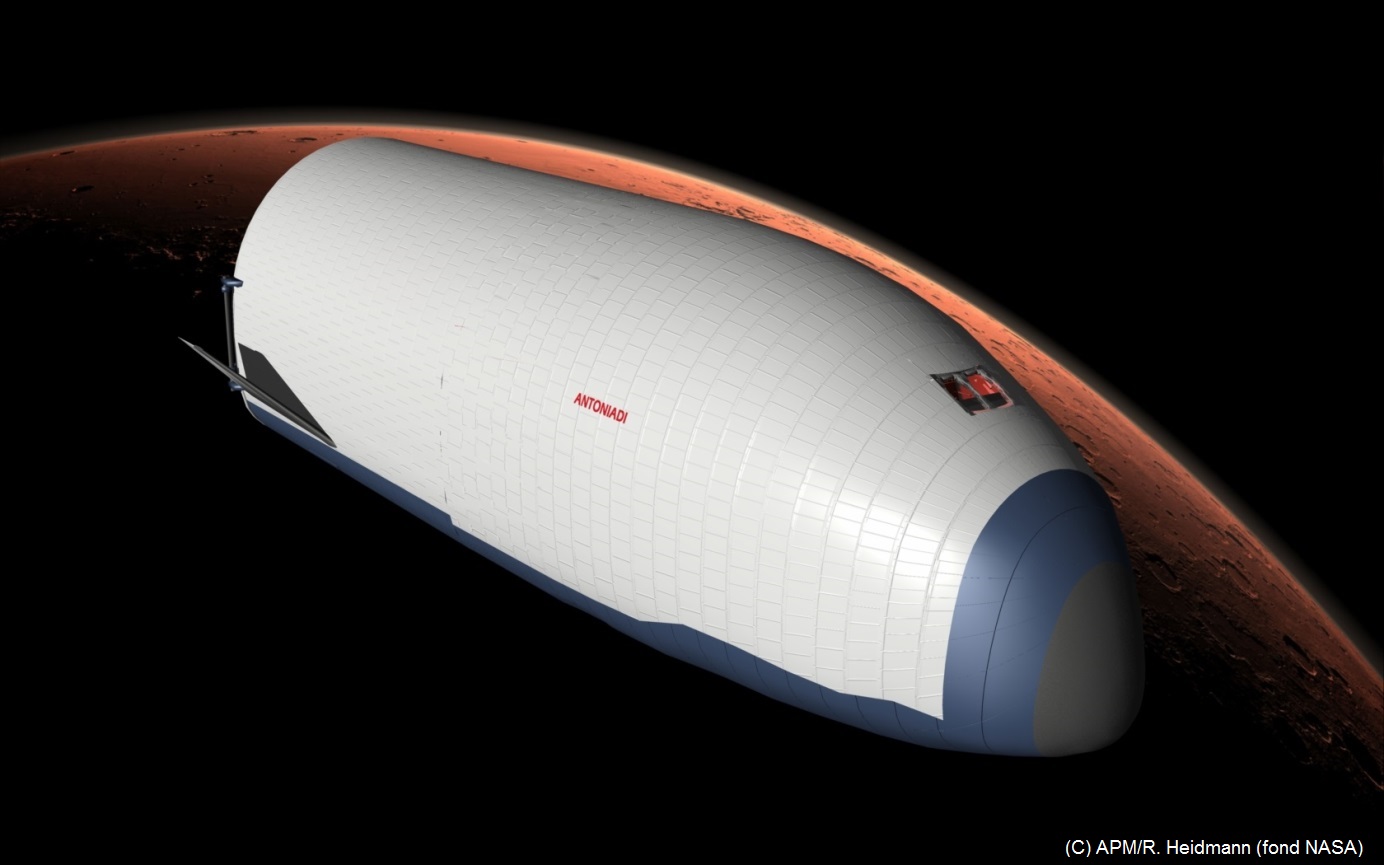 General view of the shuttle, in Mars orbit.