With a multi core configuration, it becomes possible to design a vessel with an aerodynamic surface (therefore a lift) significant because it would be no longer necessary to lodge it at the top of the ship-launcher assembly. We already underlined at the beginning of § 1.1, the importance of this fact since the increase of the surface exposed to the aerodynamic flow allows reducing the ballistic coefficient, which is essential to improve braking and to reduce the heat stress during EDL phase. We will therefore place the shuttle parallel to the cores, enough towards the rear so as to ensure a centering allowing piloting in good stability conditions during the different regimes of atmospheric flight.

Thus rid of this constraint, we can increase the width of the shuttle body in the overall design and provide for further increasing the wing surface exposed to braking, while allowing, this time, a glided landing on Earth (without propulsion).

Of course, this leads to a significant penalty in terms of structural masses; shifting from a fuselage section of 12×12 m² to an elliptical fuselage section of 20×10 m², and lengthening the vessel by 5 m, we estimate that the structure masses would rise from 45 tons (in the previous design) to 60 tons (structures – tanks excluded, and thermal protection).

But we largely come out the winners in terms of ballistic coefficient which becomes twice smaller and close to that of the X33. It becomes conceivable to provide the MCT, as was the case for the X33, with a metallic thermal protection, a priori truly reusable without need of any heavy maintenance. Beware though: the MCT (interplanetary) being due to hit the Earth atmosphere, back from Mars, at a speed at least √2 times larger than the X33 (orbital), the energy to cope with during the re-entry process, will, a priori, be at least twice greater. Consequently, the return to Earth must be done in several steps, in order to break the heat load into several parts that are easier to hold off the ship and to dissipate by radiating the thermal protection. Namely, the return would start with a first phase of aerocapture limited to positioning the ship on a highly elliptical orbit; an aerobraking phase would then allow lowering the apogee until reaching a low orbit; finally, a classical EDL would start from that orbit. Still, at that moment, the maximum flows will still remain to be born; the most affected area would be the nose, the radius of which must be maximized; fortunately, this matches the wish and the need to increase the scale of the vehicle to reduce its ballistic coefficient. We chose 3.50m.

The thermal load and the heat flow matter remains a critical point that we could not study thoroughly. It remains to be checked whether the levels reached during the terrestrial return are manageable with a reusable (non-ablative) Thermal Protection (“TP”). If this were not the case, the concept could be jeopardized at the level of the return mode, and could require either a refurbishment of the TP between each flight or a partial propulsion braking before entering the atmosphere.

It is to be noted that this problem becomes even more acute in case of an immediate return along an “opposition” trajectory, chosen for the sake of a better return on investment. Indeed, in this case the terrestrial return speed could no longer be close to 11 km / s, but would rather reach 14 km / s. Even with a ballistic coefficient half that of the Space Shuttle, we may wonder whether it could be manageable?

Anyway we’ll look at this scenario in order to assess the consequences in terms of sizing of the vehicle and of its propulsion (thrust level, propellant mass for the outward and return legs) as well as the consequences in terms of performance requested from the launcher (or in terms of payload, the launcher remaining the same). We’ll therefore first describe the basic version (standard return after an 18 months’ stay on the surface of Mars) and, afterwards, the “immediate” return version.

In terms of overall design, here are the most notable changes compared to the single core version:

The mass budget, prepared on the same basis as for the single core case is summarized in the following table:

Features of the shuttle with a multi core launcher version
and a return trajectory in a “conjunction” mode. 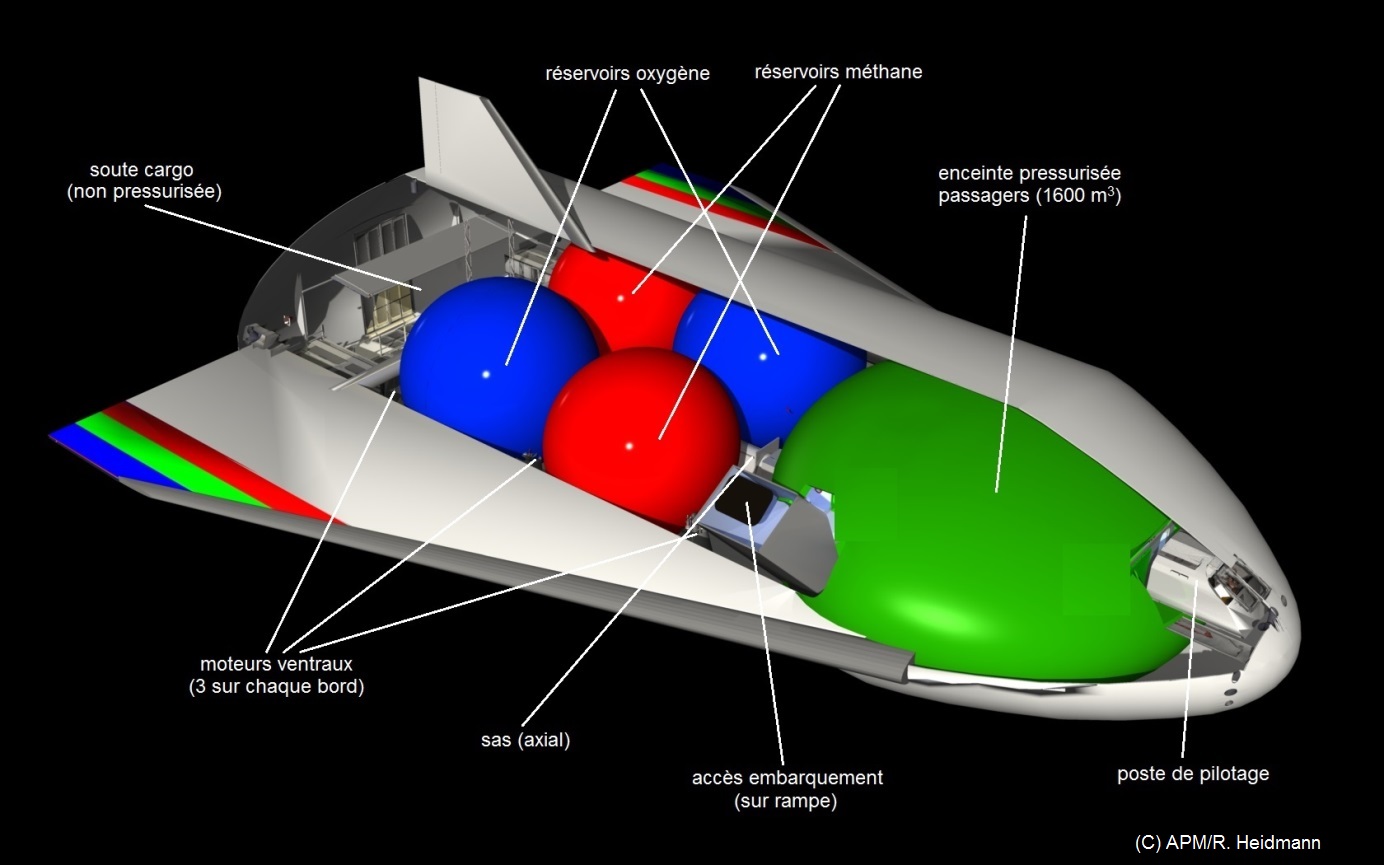 Laying out scheme of a shuttle with a multi core launcher.

The required performance in LEO is therefore 661 tons (with a propelling contribution of the shuttle). Note that, as in the single core case, this result is achieved in the most favorable transfer conditions: a Hohmann transfer and Mars being at perihelion at the time of arrival. Yet, this high launcher’s performance is obtained after having reduced by 15 tons the targeted mass payload. This result depends also directly upon the actual mass of structures and TP, for which a 10% inaccuracy makes a 6 tons difference…

When, upon arrival, Mars is near its aphelion, the payload shrinks from 85 tons down to 70 tons.

The mass upon EDL entry is obviously larger than that of the smallest dimension single core ship (237 instead of 222 tons). But, as the aerodynamic surface is, at first approximation, about 2.1 times larger (44 x 44 / 2 versus 39 x 12), the ballistic coefficient dwindles to an estimated 306 kg/m², versus 585 for the Space Shuttle; we get close to the X33 cases (240), a result that allows to consider the implementation of a truly reusable TP without refurbishing. The conditions of re-entry into the Earth’s atmosphere, outlined above, are themselves eased by the surface increase. This gain in ballistic coefficient is the main argument in favor of a multi core launcher formula.

The tank capacity must be 865 tons; it is determined by the needs of the outward leg (including 400 tons allocated for the final setting up of the ship into LEO). This quantity is lodged in 4 spherical tanks inside the elliptical fuselage of a section 20 m x 10 m.