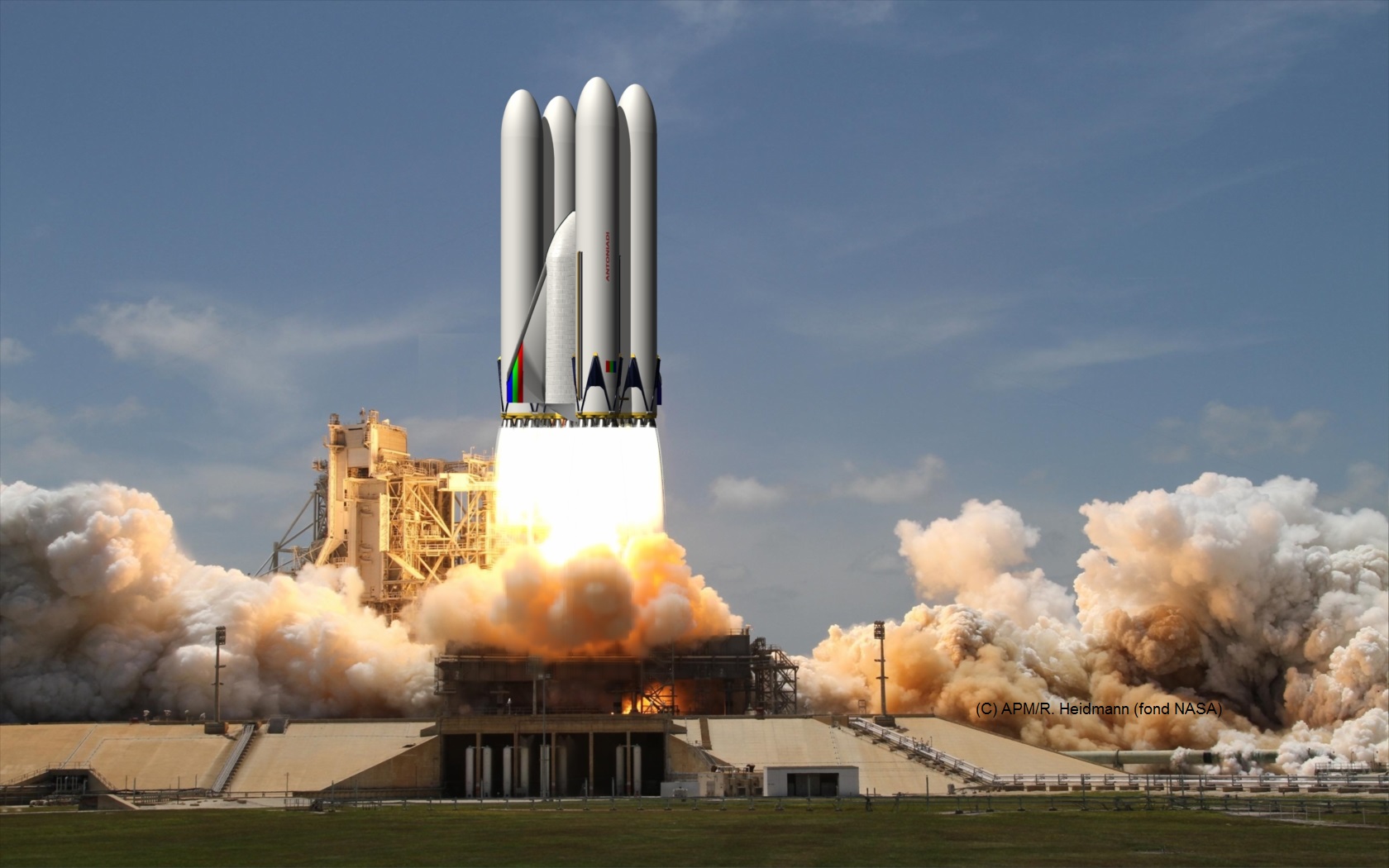 The “Shuttle in parallel” configuration is similar to that considered in our first concept, when SpaceX seemed to favor the three core formula, “à la” Falcon Heavy. Except that, if we refer to the orders of magnitude of the single core launcher, each module should be equipped with 20 engines and lift some 2,500 tons of propellant. 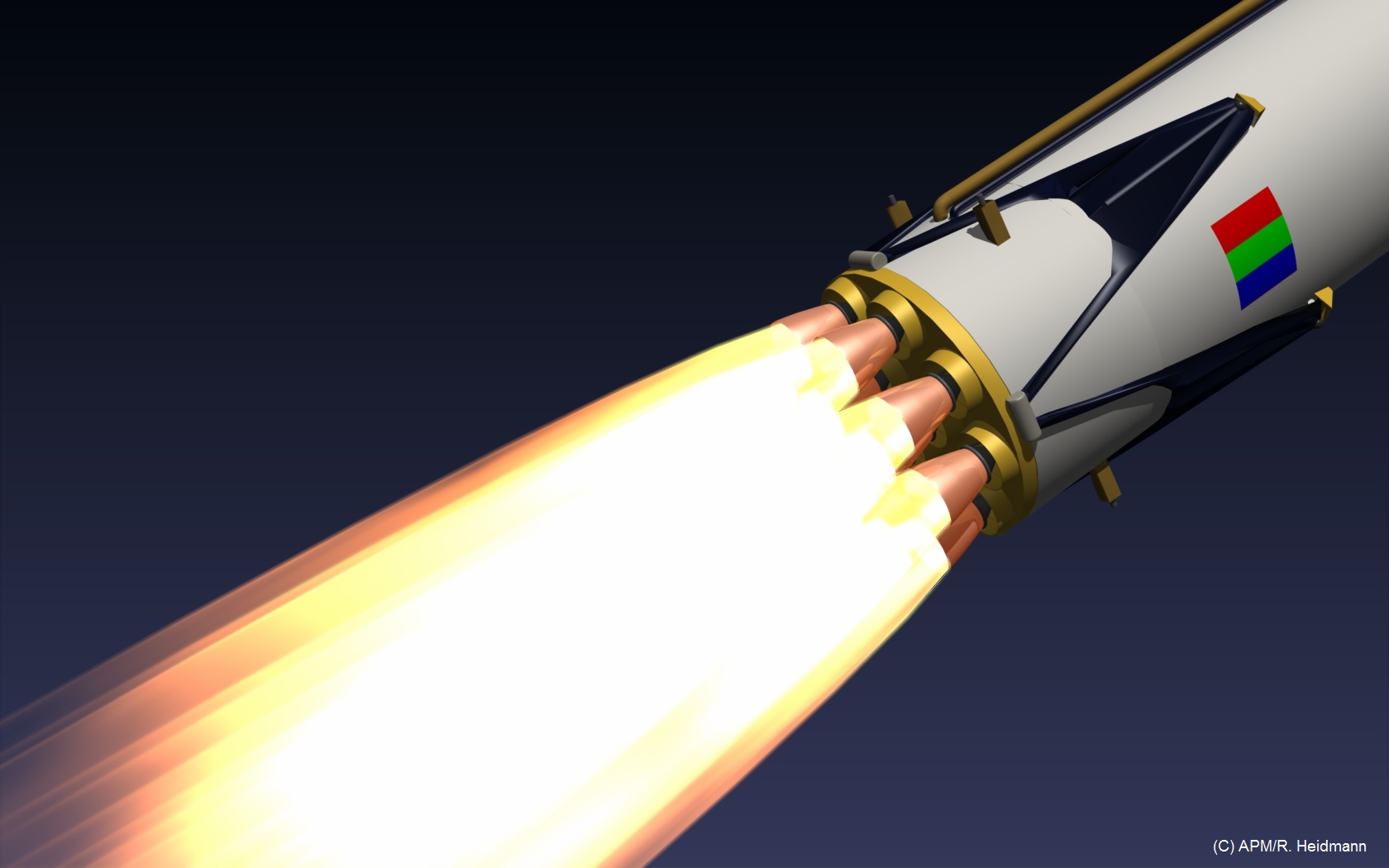 An 8.40 m diameter core (like that of the SLS) would allow building a MCT launcher without requiring any change of scale in the production means.

At this stage, since this investigation of a multi core, prompted mainly by the search for a better ballistic coefficient for the shuttle, is motivated too by looking for some cost saving in the industrial production which would thus be less affected by a gigantic scale, it seemed interesting to push the logic to its end, wondering whether it would not be possible to design a MCT which would not have 3 cores but 5, i.e. 3 under the shuttle and 2 above. The attractiveness of this architecture, which certainly presents challenges of load distribution and aerodynamics, is that it would allow using cores of 8.40 meters diameter each, which was a standard size for NASA for its Space Shuttle tanks, and is still now, with the central body of the SLS heavy launcher. This diameter is in effect sufficient to lodge 12 Raptor in the propulsion bay, according to a ternary symmetry. 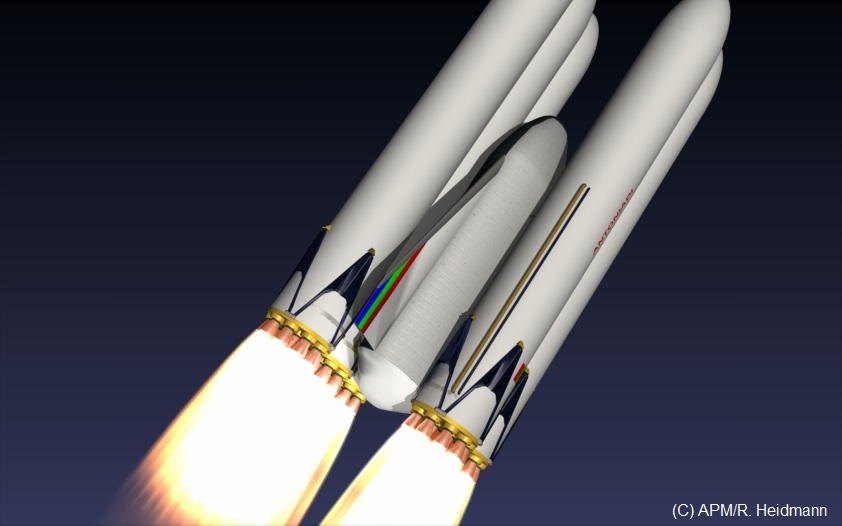 In the case of economic return of the classic scheme (§2.1.1), the required performance, with a payload of 85 tons, is 661 tons in LEO (at 300 km); it is 691.5 tons for the “immediate” return, even taking into account a payload reduced to 82 tons. These performances can be obtained with a multi core launcher made of 5 cores of equal size (diameter 8.40 m; height with ogive 64 m) each equipped with 12 Raptor engines of 270 tons ground thrust, i.e. a total of 60 (versus 61 for the single core; the thrust and take-off mass are thus substantially identical). The payload in LEO in the “immediate return” case is achieved thanks to the larger mass of propellant in the shuttle that can be dedicated to the insertion into LEO orbit.

Take-off and the initial phase, until a time to be optimized, are performed with the 60 engines at full thrust, the gravity loss rate being maximum. Then the central module is set at a minimum thrust regime, the 4 other modules continuing to operate as a first stage. In the table of launcher data, this moment is characterized by the percentage of propellant of stage 2 (the central core) burned together with stage 1. We considered the value to be 20%, corresponding to about 45 s, when the gravity loss rate begins to decrease. After the 4 modules of the 1st stage are burnt out, they are separated and start operating a recovery return, for which they have retained 6.5% of stored propellant; this low percentage is sufficient to provide these modules a ΔV closed to the speed reached (theoretical ΔV of the stage less most part of the losses).

The central core, put on to full capacity again, acts, then, as a 2nd stage, retaining 18% of its mass of propellant for its return to Earth.

Eventually, after separation and rotation to acquire the right attitude, the shuttle having already opened its 6 engine doors and deployed its divergent extensions, ignites its engines to deliver the final thrust for getting into a parking orbit.

Both shuttle versions sensibly differ in their mass budget; the “immediate return” version has a dry mass of 11% and a takeoff mass from Mars increased by 68%, due to the ΔV effort required, which are really at the limit of possibilities for a single stage equipped with 380 s Isp engines! Planning so close to the capability limits is dangerous. Of course, some items in our mass budget could prove to be pessimistic, the “heaviest” (structures and thermal protection) have only been extrapolated from documented cases: Space Shuttle, X33 and, to a lesser extent, DRA5. But project experience shows that it is generally the opposite which occurs… 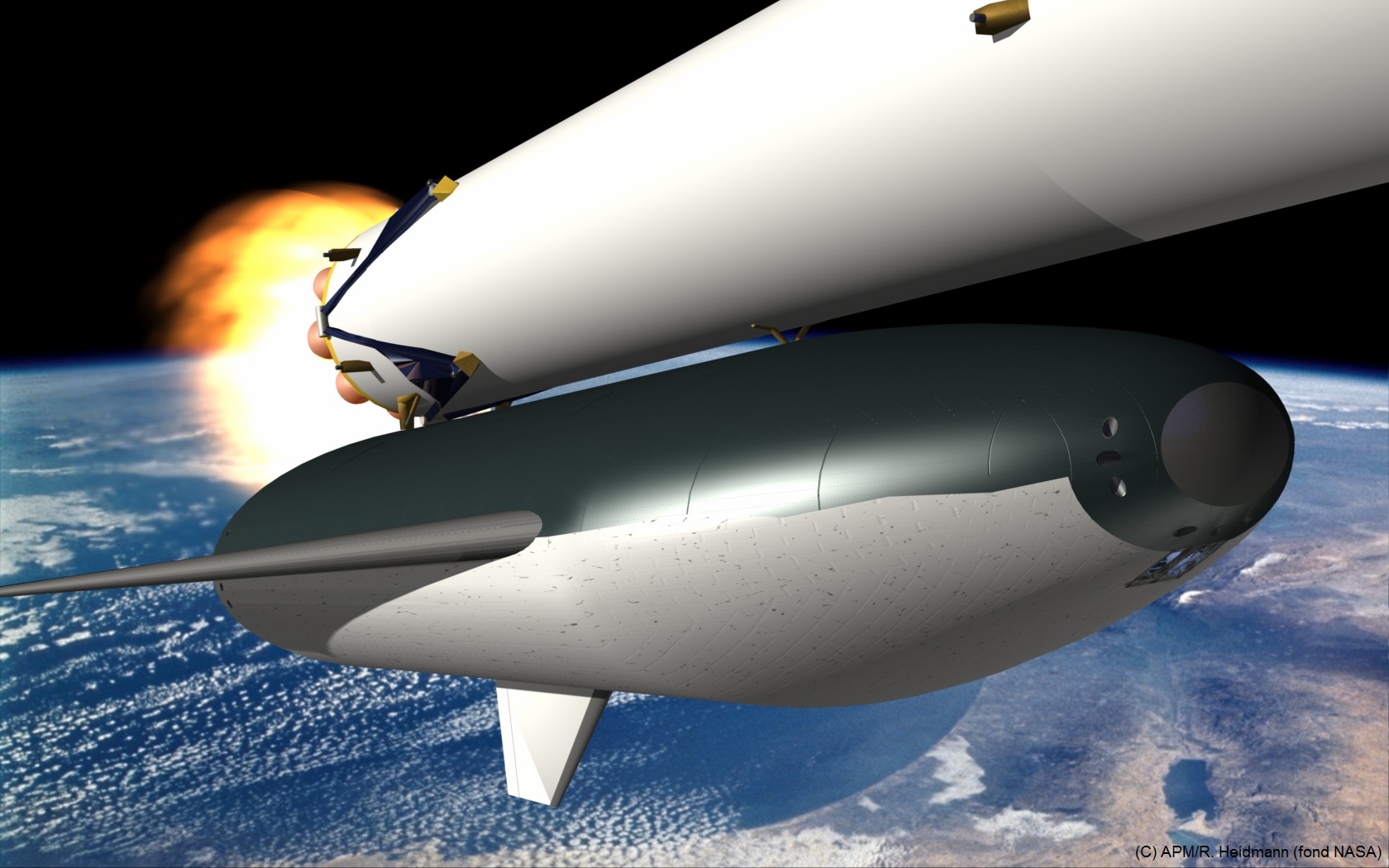 In the two tables hereunder you will see the characteristics of the launchers adapted to both kinds of shuttle considered; they are almost identical but for the contribution to launching the shuttle into LEO (and the mass), along which their operational characteristics do differ. 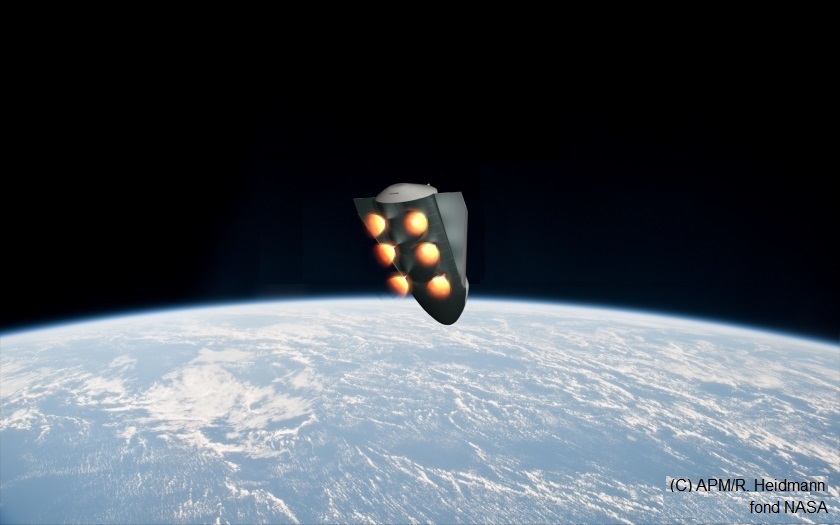