On Mars as well as on earth or other telluric planets, cliffs and steep slopes are areas where the ground provide direct access to layers and rocks which have been produced by hundreds of millions years of geological , meteorological and biological (eventually) history. With exploration lengths in the order of 100 m in the line of slope, crossing the various layers, a lot of information may be gathered on a planet history.

To be able to observe a ground which is not obstructed by debris, the slopes to be explored have to be between vertical (90°) and around 45°. A rover using wheels for propulsion cannot travel along this type of slope. One solution is to use a cable suspended rover. This rover may be entirely autonomous with a uphill anchorage provided by an other rover or be operated with more or less autonomy by astronauts operating on the up hill side. Some Mars exploration artist views are showing astronauts in space suits suspended to ropes and exploring a vertical cliff. If such a difficult operation is ever attempted, it will be only because a cliff exploration rover will have found a worthwhile feature to be observed, analysed or retrieved !

Starting from the above considerations and acknowledging that the cliff rover problems have seemingly not been addressed by space agencies or organisms, Planete Mars Association members decided in summer 2001 to explore the difficulties of mobility along a steep slope for a cable suspended rover. Main requirements were the ability to operate on slopes between 90 and 45°, the ability to deal with the highest possible obstacles on the way down or up and particularly to be able to be retrieved and brought back up the hill in those obstacles conditions and even in case of over hanging parts in the cliff. A secondary requirement was to test what would be visible with a camera on board and devices to measure the size of features visible in the camera field. 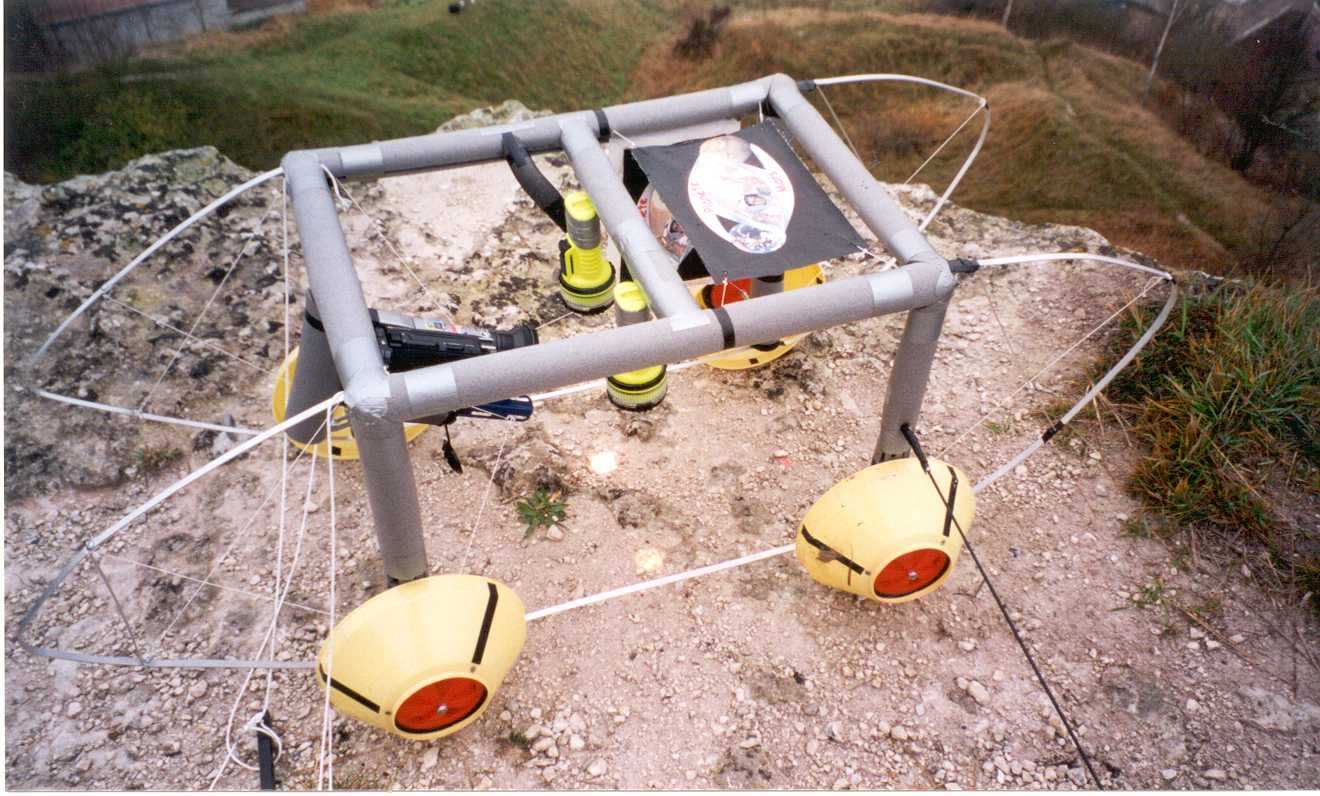 CRV 1 before a test in Vernon (doc. APM/A.Souchier) 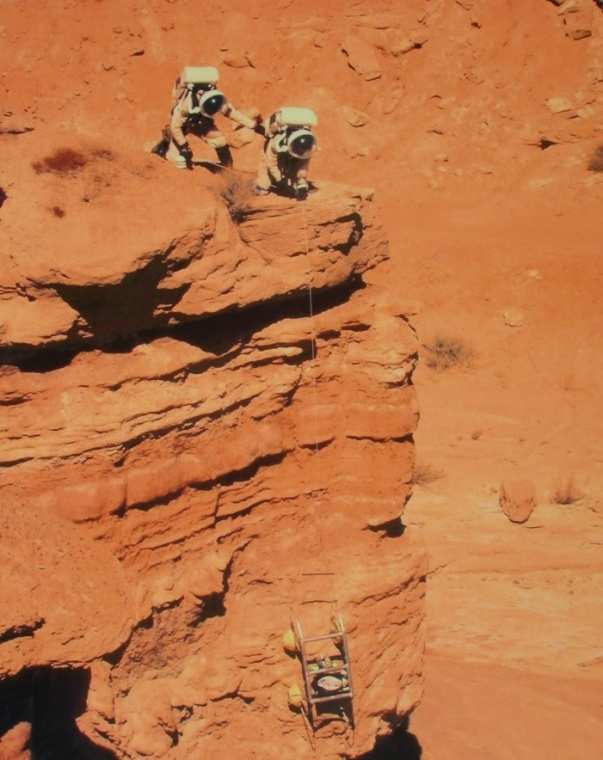 The Cliff Reconnaissance Vehicle, or CRV in short (VRP in French), is by no way a vehicle designed for actual operations on planetary grounds but only a demonstrator to test the best configurations to fulfil the above requirements. The geometrical configurations experimented as well as the size bear probably a strong similarity to a future operational vehicle but other (lighter) materials would be used as well as smaller space qualified equipments. Also the assembly process to build or deploy in the field the vehicle would be much more simplified. The CRV in its present configuration has no autonomous mobility and is lowered and brought back up manually suspended to a rope. An operational vehicle would surely be operated with an electric windlass. The operating process implies that the cliff or slope has to be accessible from above. The CRV main payload is a camera although other payloads may be envisioned.

Three different Cliff Reconnaissance Vehicle (CRV) configurations have been tested on grounds in France and in Utah where the Mars Society has implemented a simulated Mars Habitat designated Mars Desert Research Station or MDRS in short. The different CRVs have been tested around the MDRS in numerous occasions since 2002. The MDRS simulations are conducted by 6 people crews operating 2 weeks in a row, on periods from late autumn to early spring. Each rotation or mission is given a number. CRV 1 was tested during MDRS 2 by Gilles Dawidowicz (February – March 2002). CRV2 was tested during MDRS 7 by Alain Souchier (November 2002). CRV 3 was tested during MDRS 23 by Anne Pacros (February 2004), during MDRS 26 by Edwin Loosveldt (March 2004), during MDRS 39 by the Leonardo crew (April 2005), during MDRS 40 by Anne Pacros and her Monalisa crew colleagues, during MDRS 43 by Alain Souchier (February 2006), during MDRS 90 by Pierre Emmanuel Paulis (February 2010). In these Utah MDRS operations the vehicle is prepared and operated by crewmembers wearing the Mars Society simulated spacesuits which adds to the simulation realism.