In §2.3 we mentioned the different possible in situ energy sources: solar, areothermic and wind (in theory). In reality, it is a fourth form of electric (and thermic) power generation that will continue to prevail at this stage of development of the human presence on the planet: nuclear fission energy. 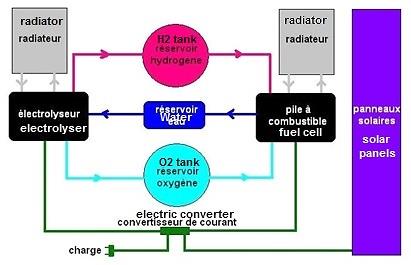 The solar option, a priori appealing for its simplicity, reliability and environmental safety, presents serious handicaps:

Actually, there is a more futuristic solar option, which is to build areostationary photovoltaic orbital stations (with materials extracted from Mars satellites) and to transmit energy down to the ground using lasers or microwaves. It is a solution not to discard, but that would still imply surfaces in the order of km²… a solution for the future?

The areothermic solution is, in our view, the most promising for the future, at least if the assumption of vast underground water pockets were to be confirmed. It obviously requires great depths drilling capacity (one to several km) but its implementation is relatively simple, infrastructure and mass are of limited extent and it avoids the problems of nuclear power. We do not however retain it in this study, on account of the uncertainty in which we are concerning the existence and extent of exploitable resources. Let’s note also that if we want to avoid the installation of power lines, the use of this energy source would strongly constrain the choice of the colony site.

The wind turbine option has already been refuted in §2.3 and is therefore referred to only for memory.

Nuclear fission generator is already the preferred solution for the first temporary or permanent exploration bases, either on the Moon or on Mars. The main reason is that, for the required power range, it is the most compact and least complicated to deploy. Projects being studied show that such a generator, continuously delivering 40 kWe, would have a mass of less than 5 mT all inclusive, with a size, in an interplanetary transfer configuration, limited to 7m x 3.3m. After deployment on the ground its size would be much more impressive on account of the radiator (heat sink), the temperature of which would only be 400 K, its designers having wished to only use a proven technology for the core and to guarantee the life period of materials by limiting the core temperature to a moderate 900 K. Its life span would be about 10 years. It is obvious that such a model, adapted to current exploration projects, would not be appropriate for a 160 MWe need.

The change of scale does not put the principle into question. Indeed, nothing prevents claiming from the nuclear core, operating at a higher power and thermodynamic fluid yield, much higher thermic powers at higher temperatures16, without increasing its size or its fuel load. In reality, it is the size of the heat sink – radiator or heat exchanger17 – which will limit the extractable power of the generator.
If we stick to the solution of the radiator, we must increase its temperature (radiation capacity in T4), and therefore the temperature in front of the turbine of the turbo generator. By raising it from 400 to 1270 K (1000 ° C) with a temperature of 1800 K in front of the turbine, we multiply its heat release capacity by 100. By multiplying the surface by 2, for example by deploying four panels of 15 m long in a cross shape, we can reach a capacity of 8 MWe (actually less, because the temperature drop of the cycle being less sharp, its thermodynamic efficiency would be degraded, and the radiator dimensions should therefore be slightly increased).

The life span, without having to intervene on the fuel load, should also be increased, up to 20 or 25 years, so that the renewal cycle be homogeneous with the setting up period of the colony (assumed to be 20 years).

16 The experimental nuclear rocket engine NERVA has been capable of delivering up to 4 000 MWth, the equivalent of more than 4 nuclear modules, for a reactor diameter of an order of one meter!
17 Contrary to Earth installations, we cannot rely on streams or on seashores to be used as cold source. Using the ground would impose difficult earthworks. Furthermore the atmosphere is too thin to be used (even though projects have been proposed to use a process of forced convection through fans). 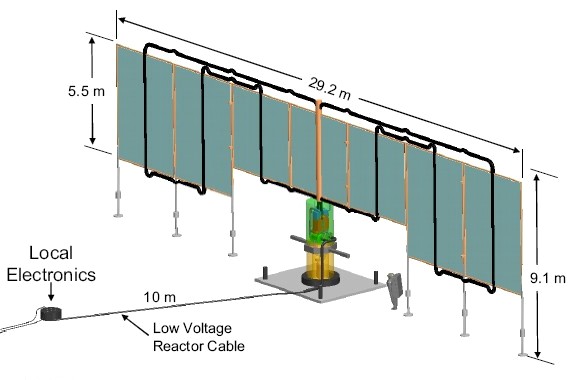 We noted that most of the energy needs of the colony were expressed in thermic form. It is therefore tempting to use the heat wasted from nuclear generators rather than radiating it off. However, the temperature required by some of the processes using energy is high (e.g. oxygen production by decomposing CO2: 1,100° C); if operating a heat exchanger at such temperatures may be imagined, at the edge – and at the cost of massive infrastructures – the problem would be transporting heat by some heat transfer fluid/medium. High temperature pipes cannot be manufactured in situ and it would become essential to locate consuming plants close to generators. In addition, when using heat exchangers rather than radiators, it would be preferable, in order to increase the efficiency of the thermodynamic cycle, to lower the temperature of the cold source.

The use of calories would thus be limited to processes less demanding in terms of temperature: heating of buildings and greenhouses, of course, but also mobilization of water from the frozen ground, and all processes requiring drying operations or heated reaction precincts: dehydration of crude ores, cooking / drying of bricks, drying of lime, various phases of steel, aluminum, fiberglass, and other production processes. At low temperature, long distance transport – back and forth! – is relatively feasible (e.g. in the form of hot water), even if it requires installing insulated pipe distribution between the nuclear power generators and the various colony living or working modules. It would be therefore possible to ensure the modules heating (habitats and greenhouses) this way.

The possibility of using the thermic energy directly gives value to ​​the nuclear option. The choice of the exchangers exit temperature will depend on the inventory of these processes. The Homestead study gives a ratio of 8 to 3 between the consumption of thermal energy and that of electrical energy. But it would impose implanting ovens and processing precincts in close proximity to generators. That’s what the Homestead project proposes, at the cost of burying reactors under regolith anti-radiation screens several meters thick. The proximity to well hidden reactors poses no problem in itself albeit in case of maintenance intervention and for decommissioning, which will suppose clearing the regolith layer.

For the progressive building up of the colony, the ideal would be to deliver an additional power module at each interplanetary transfer. Each of these modules should therefore produce 16 MWe, which corresponds to two 8 MW generators, for a total mass of a dozen mT. Note that the radiators could probably be produced in situ (if we accept that they be heavier and technologically less advanced than space radiators).

However the technology presents a number of drawbacks:

To conclude on the production of energy, if the solar source is possible at least as a secondary and relief option, the real solution for a colony, on the basis of what we can nowadays control and given the level of needs, is indeed nuclear fission.

Regarding the distribution of electrical energy, the Homestead study recommends a primary 480 V three-phasic network (to limit line losses) and a secondary120 or 240 V monophasic network. The wiring must be redundant to avoid single failure points and made easily accessible for maintenance, mandatorily from the interior of living and working modules.