Choosing a favorable location to allow the best astronautic mobility for settlers and materials is a must. But still, we’ll have to consider the environmental conditions that people (and equipment!) will have to face in that location, knowing that in space:

The surface of Mars, the large extent of which we already underlined, offers a large variety of landscapes, often spectacular, witness of the wealth of the turbulent geological history of the planet. Beyond their interest for scientific exploration, these sites of wild beauty should display an undisputable appeal for tourism which should strengthen the commitment of settlers to their planet. Moreover, the presence of an atmosphere gives life to these desolate landscapes: scarce cirrus clouds moving in altitude, dust vortices (“dust devils”) wandering over the ergs, sky colors shimmering from salmon pink to purple and blending with the warm colors of landscapes. The psychological value of this “living” environment cannot be underestimated; even though it is likely that the images of terrestrial places will be reproduced within the colony (gardens, ponds …). Knowing that you live on a planet rich of such emotional potential is certainly more motivating than being aware of being locked within a habitat lost in the emptiness of space.

The distance of Mars from the Sun leads to an irradiance on average twice weaker than that received at the distance of the Earth orbit (with an important variation along the Martian year, on account of the strong ellipticity of the planet). This factor is obviously not suitable for the extensive use of solar panels as an energy source. Furthermore, given the lack of ozone in the atmosphere, ultraviolet radiations received on the surface are 600 times stronger than on Earth. However, it will be easy to protect humans and crops by making the right choice of materials (for spacesuits visors or transparent domes).

The tilt of the polar axis is nearly identical to that of our globe, which causes a seasonal phenomenon, the duration of which is however about twice that we know, because the Martian year lasts 1.88 year. Let’s note however that this obliquity is essentially fluctuating, over periods of more or less 100,000 years, within ranges of 0° to 40°, even 60 °, capable of inducing very important climate changes, as evidenced by the laminated deposits of polar ice. This is a factor that a possible Martian civilization will undoubtedly have to take into account in its planning of important civil works!

The length of the day, 24 hours and 37minutes, will be particularly favorable to the rapid adaptation of newcomers. It also limits the thermal peaks between day and night (which are still in the range of 60° C, given the thinness of the atmospheric cover). Eventually, it makes the problem of energy storage day/night simpler in the case of a solar energy source. This compares favorably with the Moon where the length of the diurnal cycle of 28 days can create tremendous stress from these points of view.

The surface gravity, equal to 0.38 times that of Earth’s gravity, should be enough to prevent the negative physiological effects of microgravity. Strangely enough, after half a century of space flight, we still have not cared about ensuring that this is indeed the case, neither for the still lower level of lunar gravity2 … Reduced gravity will affect the architecture. It will facilitate building works, especially the construction of pressurized domes to be covered with an anti-radiations protective layer (water, regolith…).

The planet has an atmosphere, essentially made of carbon dioxide (95%) but also of nitrogen (1.9%), the pressure of which is limited to a few mbar (6 to 10 mbar depending on season and altitude). Temperatures are generally very cold, but highly variable, depending on the hour of the day, season, latitude, altitude. The average temperature has been estimated to be -55° C; extreme temperatures reach -125° C and + 20° C; the diurnal cycle normally extends over 60° C. As for the Earth, temperature increases with depth within the subsurface, although we do not yet know along which gradient.

Albeit thin, this atmosphere plays an essential role in the prospect of a settlement:

Even if the surface winds usually blow at less than 5 m/s, important temperature gradients can occasionally cause “hurricanes” (200 km/h). Although their mechanical effects do not however exceed those of a gentle breeze on account of the low density of the atmosphere, they nevertheless transport at full speed tiny dust grains which therefore will have an abrasive effect on superstructures. 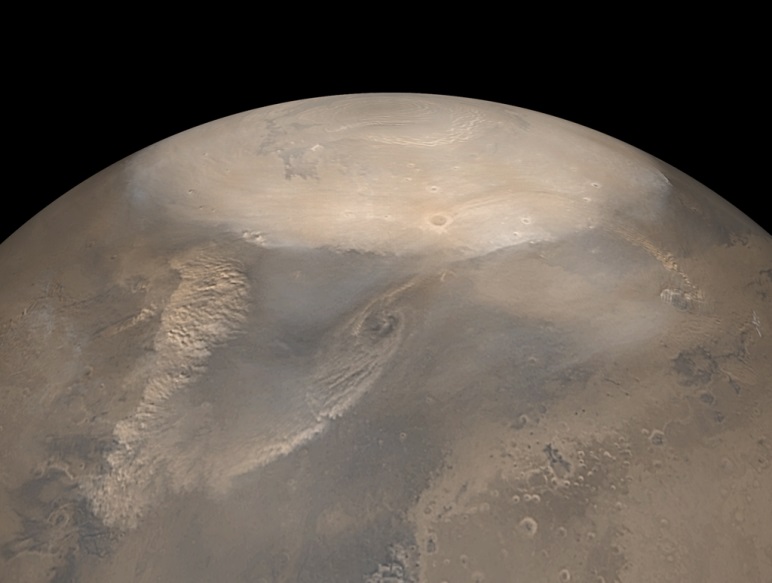 2The Mars Society, relayed by the MIT, took the initiative of a program named « Translife », the purpose of which is to launch a small satellite in which mice would be submitted to this level of gravity in a centrifuge, then recovered to be analyzed (see marsgravity website).

Dust storms occur occasionally, either regionally or even (once in a Martian year) globally. The consequence is a significant darkening of the solar flux (more than 95% has been measured), dust deposition on surfaces such as solar panels or greenhouse domes, eventually risk of pollution of sensitive areas (joints, sealings, optical surfaces…). 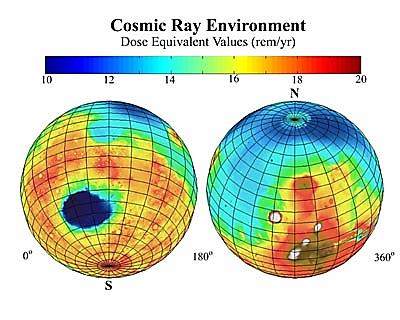 Annual doses on Mars, estimated as a function of altitude; the tolerated dose is 50 Rem. (doc. J. Lewis)

The most severe environmental constraint for the installation of Man on Mars would come from ionizing radiations, much more intense than on the surface of the Earth. They have two origins:

The dose incurred during interplanetary journeys is at the threshold of what is admitted by the international health standards set in 1995 for the International Space Station . On the surface of Mars, however, it gets two mitigating factors: on the one hand half the source is blocked by the horizon, on the other hand, the atmosphere, although tenuous, would further reduces the flux, so that the dose received annually is reduced to an acceptable level , depending on the altitude (thickness of the atmosphere). Though for temporary exploration missions, the incurred total dose would remain acceptable, it will be highly desirable to protect most buildings for long stays or for life long periods.

3 Maximum doses: 25 Rem / month, 50 / year, 100 to 400 / life (according to age and gender).
4 To tell the truth, we lack experimental data on cosmic rays, regarding on the one hand the biological effect of the heaviest and most energetic particles, and on the other hand the effect of the atmosphere (and the ground) on the flux (lowering of the energy level and modification of the nature of the particles).