In any space colonization project, the question of availability of local resources is obviously crucial; having to import everything in order to establish the colony or being able to find at least the heavy materials on the site does not open the same prospects! In situ availability of resources needed for the life of the colony (water, air, food, energy …) is perhaps even more crucial since this is key to the long-term sustainability of its operating conditions.

The surface of Mars is arid and its atmosphere, although its saturation rate is enough to allow the condensing of ice clouds, contains only a few precipitable microns of water vapor). In fact, water can almost never exist on the planet in a liquid form, given the prevalent pressure and temperature conditions. Nevertheless, numerous traces of recent flows (less than 1 million years ago, and probably much less) show that liquid water occasionally does flow (probably during cyclical climate changes caused by wide obliquity variations). Moreover, we now know for sure that huge quantities of water are sequestered: 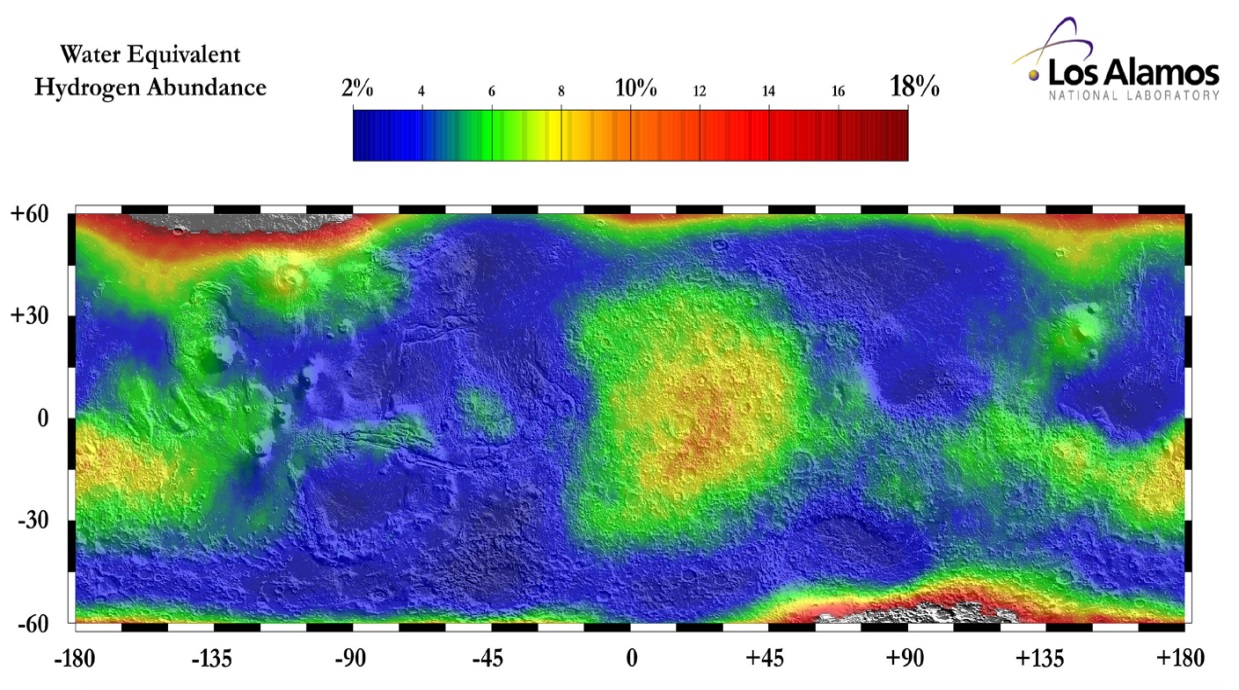 Percentage of water content in the close underground. (doc. LANL)

Mars, contrary to appearances, is therefore a world where water abounds everywhere and is easily exploitable. A colony will have no difficulty to get water at a minimal extraction cost (ground mining and melting of ice content). Nevertheless there may be a portion of the hydrogen detected by the Mars Odyssey neutron spectrometer that comes from adsorbed water molecules, or from hydrated minerals. But detection of sheer ice on the Phoenix probe site (68° latitude) and the general geologic history of the planet make the presence of ice likely.

The availability of water ipso facto provides access to another essential resource, hydrogen. This is primarily valuable as propellant for rocket engines, since they burn hydrogen within oxygen – or alternatively methane or methanol (synthesized in situ, see §5.5), or even as it can be used to supply an interplanetary nucleothermic propulsion shuttle or a magnetoplasmic engine parked in Mars orbit. But it will also be used to make plastics and, probably, in the synthesis processes of many other chemicals.

On Mars, there is no need to handle tons of regolith or spend huge amounts of energy in order to break closely bound oxides to get oxygen. Oxygen is a “by-product” of the electrolysis of water used to obtain hydrogen. It is also possible to draw atmosphere in a compressor, decompose the atmospheric CO2 (95% of the atmosphere) at a temperature of about 1100° C, and segregate oxygen from carbon monoxide using zirconium membrane cells.
Oxygen is an essential constituent of the habitat atmosphere and propellant of chemical engine rockets.

The Martian atmosphere contains 1.9% nitrogen. It’s not much but it’s a bargain! Indeed, nitrogen, inert as it is, is essential, primarily as a buffer gas of artificial atmospheres. But it will also be used to produce nitrogen fertilizers necessary for food crops.

Atmospheric carbon dioxide is the most accessible resource offered by the planet to its inhabitants. As we have just seen, it will allow a relatively easy production of oxygen. But it will also be widely used as a carbon source for the production of hydrocarbons used in rocket engines. Indeed, methane, methanol or heavier hydrocarbons, polycyclic or not, can be obtained by simple and low energy demanding processes, the most popular being the Sabatier process (see §5.5.4).
More generally, CO2 is a carbon source which may be used in other industrial processes.

Regolith, a powdery or crushed material, will be used heavily as a cover for habitats, to protect them from ionizing radiations. By reducing silica, it is possible to get silicon for the production of solar panels (to the extent that other photovoltaic technologies would not have emerged by then!).

Clay deposits are common on Mars. Clay may be used as a building material, like bricks.

Recent robotic missions have taught us that the Martian surface contains abundant mineral deposits, mainly sulfates and chlorides, source of sulfur and chlorine, allowing the synthesis of sulfuric acid and plastics. 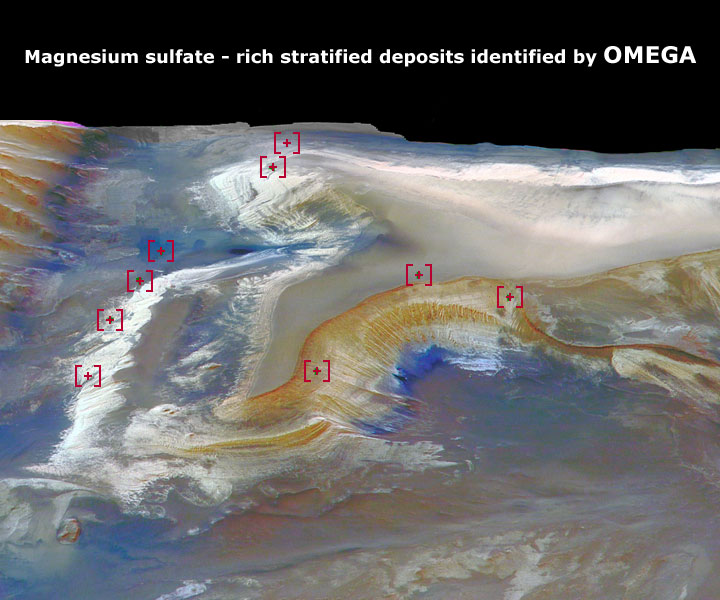 All metal elements are present in the Martian ground. The most abundant, in the form of various oxides, is iron. It will therefore be always possible to extract iron, titanium or aluminum from regolith. Furthermore, the planet volcanic activity, very intense in the distant past, had to create significant hydrothermal events (a typical example of which the Spirit rover found on the “Home Plate” site).Were these phenomena numerous and over long enough time spans for allowing vein deposits? We do not know yet, but there is every reason to think so. These rich deposits would be especially valuable in the context of the export economy of the colony; indeed, the supply of some scarce metals to Earth (e.g. platinum family) could in the near future become a real problem due to the combined effect of depletion of deposits and growth of industrial needs.
As regards manufacturing of metal parts for use in the colony or exports towards space construction projects, regolith iron should be enough, especially if, taking advantage of the presence of carbon, it can be converted into steel.

Martian soil contains no organic material which could be used for agriculture. However, some places do contain essential nutrients and present no unacceptable characteristics (excessive acidity for example). It will therefore be possible to use Martian soil as a medium for food crops in greenhouses provided it is amended and irrigated. The vicinity of this type of “places” should be one of the factors to consider when choosing the location of the settlement.

On a world practically cloudless, with vast virgin tracks of land and a diurnal cycle of acceptable length, it is a priori interesting to count on solar energy. But three constraints have already been reported: the distance to the Sun, which divides the panels yield by 2 relatively to the Earth orbit, the dust storms phenomenon, which practically reduces energy production to nil, and the unavoidable dust deposits on the panels (robotic dusting to be provided for!)…

Martian geology and topography allow imagining the possibility of using energy from hydrothermal or even plain water tanks. Indeed, the hope that the huge amounts of water that plowed the Martian landscapes are now largely sequestered underground has been validated by the observation of significant amounts of water (as ice and hydrated material) in the first meters of the subsurface. If the thickness of regolith soaked with water is large enough, ice must turn into liquid water at some depth, leaving room for groundwater tables. By digging wells in depressions (canyons, bottom of impact basins) it should be possible to force spouting pressurized water out … The pressure may itself actuate turbo-generators. If furthermore water is warm, which should be the case at a sufficient depth, it could be used as the heat source of a thermal machine. Better yet, as this pressurized hot water should vaporize immediately at the mouth of the well, we could directly use steam to power a turbine alternator.

The high speed that winds can reach is a misleading advantage on account of the low density of the atmosphere. Besides, wind speed is usually low (see section 2.2). This option is not applicable.

This overview of resources shows how attractive the surface of Mars is as a site for the proposed space colony. It does indeed lack nothing essential except, probably, organic matter to amend the crops (but waste can be recycled for this purpose, and nitrogen fertilizers can be synthesized). It should be particularly noted that the basic chemical elements of life, C, H, O, N, are present on Mars while the Moon lacks them (except for O, but strongly bound in soil oxides, and for almost inaccessible and sparse ice deposits near the South pole).

In a community the cultural level of which will be quite high, given the requirements for living and working in these special conditions, research will constitute a major activity. The Martian economy should draw a decisive share of its export earnings from it, and the scientific potential of the planet should thus be considered as a part of the environment of the colony and key for its development.
This potential, acknowledged as of now, will be taking profit from in several fields:

Mars presents all the psychological attributes of a distinct world. A world of amazingly diverse and beautiful landscapes, a polar desert of course, but to which the warm colors of its ground and sky give a vivid life, a planet with an extraordinarily rich geologic and climatic past, which keeps on living and seems to be waiting for our arrival. This world is a source of imagination and unique inspiration among all other imaginable astronautic destinations.