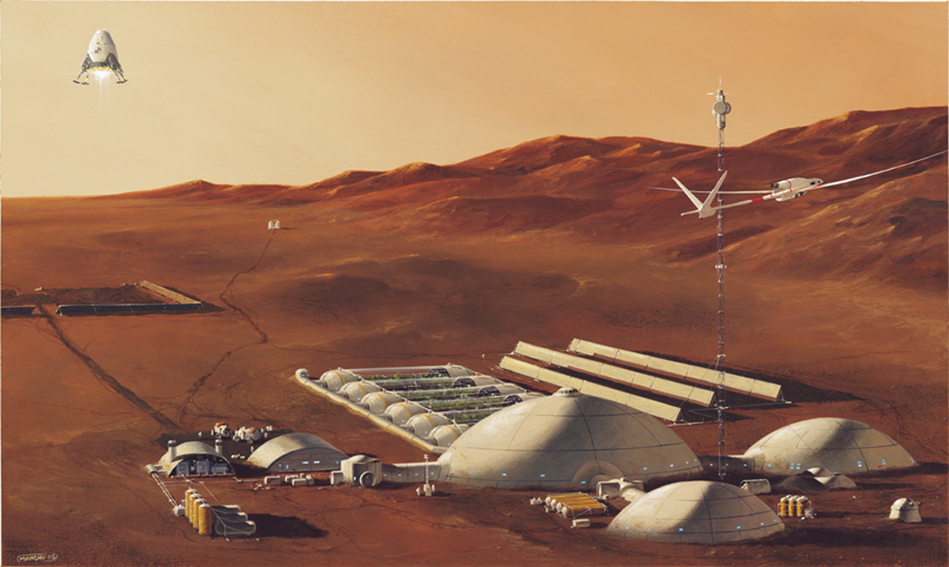 The permanent scientific base, where the technologies of a future Mars settlement will be developped. (© Manchu/APM)

When one tries to imagine future human settlements in space, Mars asserts itself as a preferred destination; indeed, its environment is the least inhospitable of all those one can think of in the solar system and the planet abounds with essential, easily exploitable, resources. Admittedly, unlike the Moon or any orbital station, Mars is very far away. But since we are speaking of colonies where people are expected to live for a long time, even for their whole life, does this really matter?

The purpose of this study is to analyze what might a Martian colony look like, and how the specific conditions offered by the planet should influence its design and its realization mode.
Naturally, if Mankind’s destiny is to settle the Red Planet, the historical process leading to the emerging of one (or more) colonies will be slow and gradual, each step allowing to better know and better control the conditions of a larger settlement. Without expressing an opinion on either the likelihood of the scenario, or the time schedule within which its subsequent phases could be achieved, we may imagine its successive stages as follows.

Initially, our presence will be limited to semi-permanent scientific expeditions (18 months every 26 months), carried over by crews of typically six explorers staying in temporary habitat modules. This phase of scientific exploration, which may extend over several decades, is the one referred to in current projects. This is not science-fiction. 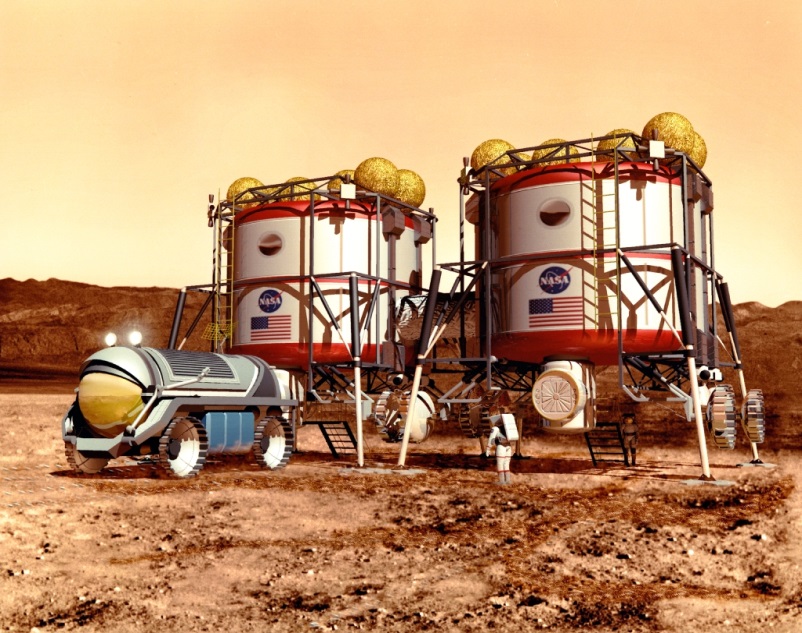 The scientific and astronautic interest of the planet asserting itself as its discovery progresses, the setting up of one or two permanent scientific bases, similar to our Antarctic bases, should eventually be decided. Teams of scientists and technicians, representing some 20 to 40 individuals, would stay on for a few synodic periods (typically, two to six years). It would still be temporary expatriations, in fact some kind of “tours of duty” as expatriates can experience in subsidiaries abroad of their own companies. This phase would allow, besides a considerable deepening of the scientific investigation of the planet, developing specific technologies related to the exploitation and recycling of local resources, starting, logically, with the most essential: oxygen, nitrogen, water, solar energy, food crops; but also by addressing the production of building materials: clay bricks, cast parts, plastic films, iron work… 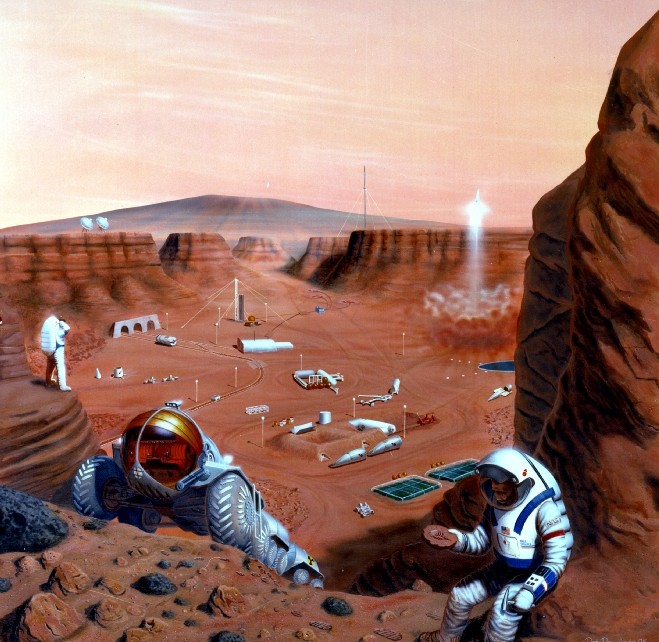 The length of this phase will mainly depend on the intensity of the efforts that will be dedicated to it, itself a function of the will that the space powers would use to push forward the project of sustainably establishing Mankind on another world. Assuming this will does express itself concretely, the gap between each launch window (every 26 months) and the development of local resources exploitation methods will, in any case, cover a time span of several decades.

If the results are positive, then the feasibility of establishing a human colony, at least from a technical and economic point of view, would be verified, being demonstrated that its construction and logistical support would be mostly based on local resources. Naturally, the persistence of the global economic development at an average level of 3 % per year, the emergence of “heavy” space activities and the operational advent of means of transport much more thrifty (for launchers) and faster (for transfer ships), would be key factors to reach that stage. In our scenario, let’s figure this would occur in about a century. 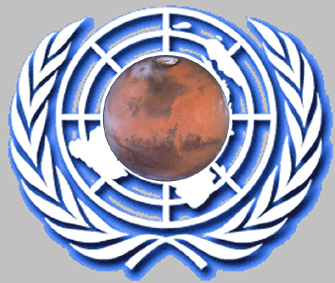 A project for a united world?

At this stage, provided we furthermore assume that good understanding between nations will allow forging a common ethic (as we currently witness regarding climate change?), we may conceive that the decision to build a significant size experimental colony on Mars, be taken. There could be various motivations for such a grand project:

Such an experimental colony would host a few hundred settlers, some of whom could, for the first time, have decided to emigrate permanently. Its setting up would only be possible at considerable cost for the Earth and, even though its self-sufficiency regarding the basic materials would be total, it would largely remain dependent for processed products.

The objectives of this experiment would, this time, extend far beyond the technical (and physiological) sphere, in three main directions:

These are major unknowns. It is difficult to refer to historical examples of colonization and autarkic communities to foresee how this society would structure itself and evolve. In terms of tradable goods and services, for instance, many ideas have been put forward, but they still rely on hazy assumptions. Lastly, the opinion of specialists is that it is virtually impossible to model the behavior of an ecosystem such as the one that men would be supposed to create on Mars.

Subsequently, either the experiment will fail, and we will keep doing with human settlements strictly limited to the execution of scientific and logistical tasks, more or less developed, or it will gradually prove successful, paving the way for a new activity domain for Mankind. We here presume this second hypothesis proves true, that the three unknowns noted above have been lifted up and, on this basis, following a development process having turned to be a natural one, that the experimental colony has begun to grow with diversifying and expanding activities.

At this stage, we would have reached the level of a first-generation colony capable of maintaining itself without perfusions from Earth, even though we assume that Earth nations keep on making every efforts to facilitate the emergence and consolidation of the new community (acknowledgment of property rights over land and intellectual assets, granting of best business practices and preferential loans, granting of marginal transport prices, facilitating of people moves, and so on). As we assume to be within an evolutionary phase, it is difficult to estimate what should be the size of such a colony. This parameter is essentially a function of the variety of activities necessary for its persistency. Part of these would be linked to its development, its operation and its maintenance; another one, the most difficult to assess, would be dedicated to the production of goods and services needed for the Martian economy to achieve a balance in its trade with Earth.

It is at this time of History that we place our study. This choice allows us to assess the features and the technical feasibility of a genuine extraterrestrial human settlement, while avoiding projecting ourselves too far in the future, in order to avoid presuming hypothetical technical advances. As the study is not trying to analyze what the (productive) export business of the colony would specifically include, we cannot justify a vital minimum size. We made the hypothesis, reasonable but arbitrary, of a 2,000 people population. This may look small, but we will see that if on Earth a town of 2,000 inhabitants is a very small one, establishing such a community on another world is a very daring undertaking. This size is also likely to allow performing all the functions of the colony. Therefore, it is on the basis of this scenario that we will imagine its general architecture, its realization modes and its functioning.

For the sake of simplicity, we’ll furthermore assume that, after achieving this size, the colony would have reached an optimal volume allowing it to meet the economic objectives necessary for its survival, i.e. that it would no longer be in a continuous and fast growth phase. Given the “commercial” activities imaginable at that time (scientific and technological research of a very specific nature, tourism, logistic support for still experimental asteroid missions, exports limited to some of the rarest metals), this assumption looks reasonable. It allows studying the colony in a “cruising speed” mode.

The science fiction fans may project themselves farther into the future, according to their more (or less) optimistic vision of our destiny as a species. If we imagine that human activities in the Earth – Moon – Mars – Asteroids system develop over the next coming centuries, then the Red Planet with its exceptionally favorable conditions should see its first and possibly subsequent colonies extend much farther. Will we, one day, reach the stage of a true civilization, deployed over multiple sites and encompassing much larger populations (hundreds of thousands or even millions of people)? Then, the ultimate stage of the Martian saga could be terraforming. Though this magnificent planetary engineering project has been the subject of serious scientific studies (Carl Sagan, Chris McKay), there seems to be no socio-economic analysis to support it…

The operation would be conducted in three phases, along increasing time scales: initial warming of the atmosphere (with artificial greenhouse effect gases) allowing restoring a carbon dioxide atmosphere of some 150 mbar (time scale: a few decades); production of oxygen through photosynthesis using genetically modified microorganisms (time scale for the first conspicuous effects: tens of thousands years); mobilizing of the water ice present in the ground (time scale: hundreds of thousands years). Given the scale of resources to be gathered and the time span involved, it could only be the project of a large and prosperous civilization. With that matter we do enter into the realm of science fiction.