Prior to examining in details the infrastructure to be set up and operated in order to ensure the life of the colony, we need to analyze the constraints to which the design of a colony of the type and size considered here will have to conform (for the record, the first autonomous colony generation is supposed to count 2,000 people), and give an overview of its general development principles.

Use of in situ resources

The use of Martian materials for the construction of buildings is a must given the considerable cost of transporting heavy materials from the Earth (or from the Moon). Fortunately, the presence of iron oxides, carbon, clay and water authorizes to consider producing them locally. Provided, however, people and / or governments agree to a sizable initial investment: vehicles for raw materials collection (scrapers, trucks, conveyors…), ground pretreatment facilities, chemical or electrolytic treatment facilities, baking ovens (clays), ovens for steel production… Each of these means will remain small in terms of Earth industrial facilities. Nevertheless, they represent a relatively large tonnage and quantity of labor to be imported from the Earth.

The colony, whatever its level of self-sufficiency will be highly dependent upon an astronautic infrastructure capable of ensuring transportation to and from the Earth environment, the asteroids and the Martian satellites, and also upon air travel all around the surface of the Martian globe.
Even in these advanced days, spacecrafts will remain potentially dangerous, especially during takeoff (i.e. when tanks are full); for safety reasons, the launch pads (and landing pads), as well as the refueling infrastructures, will have to be located far enough from inhabited areas (several kilometers). Maintenance / preparation halls will also have to be erected aside. The landing areas will have to be consolidated and dusted, and firing pads should include a deflector to avoid projections on departing ships.

In principle, using airplanes around Mars is not excluded, provided that we can accommodate large wing span and high take-off and landing speeds, which implies long airport runways. From an energy budget perspective, launching from a site close to the equator would be preferable; but as the ΔV required are much lower than on the Earth, this criterion will be less commending. Of course, this vast airport area will be served by roads, also reinforced, able to allow the supply of propellant to the refueling zones, the transit of spaceship, freight and passenger traffic, all this likely to imply some twenty kilometers of tracks.

The environment features, described in section 2.2, will determine to a large extent not only the design of buildings, but also the overall development (ground plane) of the colony; the factors perceived as the most critical are: reduced weight, composition, pressure and temperature of the atmosphere, temperature and physical conditions of the ground (powdery, rocky or frozen), presence of dust, of ionizing radiation (from which it will be necessary to get protected).

Reduced gravity is indeed an advantage that Martian architects will have to take profit of. It will be possible to build lighter and slender structures. Their assembly will require less powerful construction machines. But the most significant benefit will appear in the handling and installation of thicker coatings to protect buildings from ionizing radiations or possibly to ensure their thermal insulation.

Pressure and atmosphere composition prohibiting living in the open, all habitable environment (buildings, closed vehicles, spacesuits) should necessarily be tight and pressurized in a controlled atmosphere. Pressurization induces many technical and operational constraints: 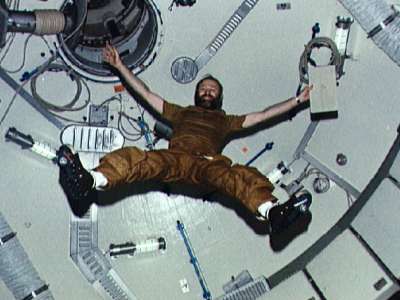 Skylab was operated in an atmospheric pressure of 340 hPa only. (doc. NASA)

Martian soil: the nature of Martian ground could vary on the surface: lava fields, sedimentary deposits terraces, more or less cratered according to their age, usually littered with scattered rocks, and also sand or dust dunes, landslides debris, moraines, and so on. Regolith, a mixture of dust and rock debris smashed by meteorite impacts, is omnipresent, possible to measure so far but which should reach several hundred meters or more. This regolith itself, and the more or less fine dust layer which covers it, are a priori ideal materials to be handled and dug. However, to a more or less significant extent, depending on latitude (see section 2.3), this rocky mixture is mingled with ice water, which tends to make it very hard, except in a superficial anhydrous layer of some tens of cm at most. It will always be possible to collect regolith, but if we want to dig (to bury buildings or services), it will be necessary to choose a location with low ice water content (which is generally the case in inter-tropical areas). 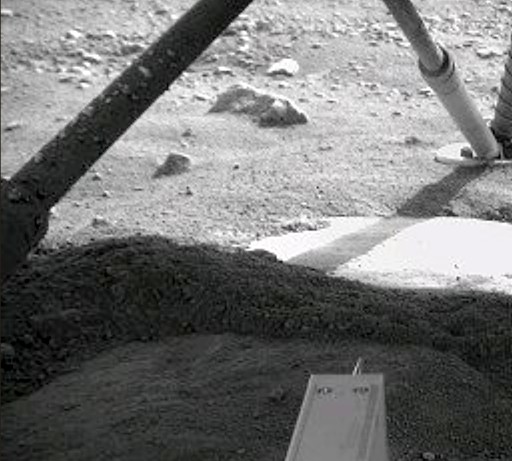 In the design of buildings, account will have to be taken of another feature of the ground: its low temperature; Indeed, while the atmosphere temperature endures significant variations according to hours and seasons, that of the underground remains close to the average Martian temperature (around -50 ° C). It will therefore be necessary to insulate the walls of the shells of the habitats which will be in direct contact with the ground. Let’s note, on the other hand, that this “tank” of cold can be utilized as the cold source of nuclear power generators, albeit under the condition that it would be possible to bury a developed network of pipelines for the cooling fluid flow. 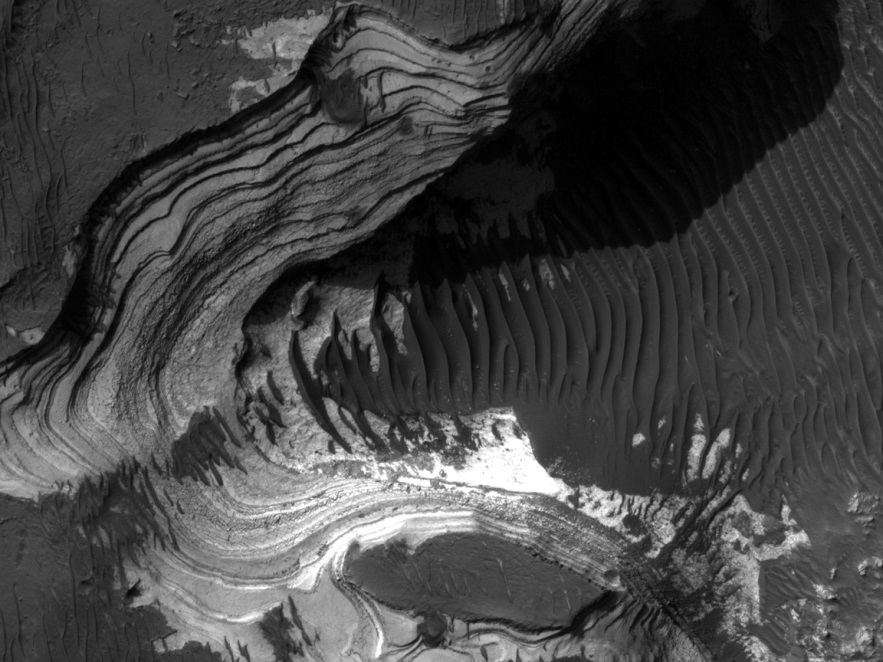 Sedimentary terraces, dune fields and cliffs: Mars is not only made up of desert plains, as the careful choice of landing sites for automatic probes may lead to think. (doc. NASA/JPL)

Dust: like the Moon, Mars is extensively covered with dust produced by the crushing of the ground by impacts. The atmosphere, tenuous but stirred by steep thermic gradients, mobilizes the environment, which triggers two consequences to be considered in the design of the colony:

Ionizing radiation: the necessity to protect buildings (at least those where the settlers will stay most of their time) will lead to a very specific type of architecture, mixing protection with a regolith cover and openings to the outside light and the visual environment using different devices (see §3.2 following). A meter of regolith would be enough. It would be conceivable to increase this layer to a 2.5 m thickness in order to balance the internal pressure with the weight of the cover, but in this case the walls could collapse in the event of depressurization…

In the vicinity of the outdoor activity areas, away from the colony itself, anti-solar storm shelters (not necessarily pressurized) will be needed. Vehicles themselves, to the extent that their autonomy will enable them to move away more than fifteen minutes from a shelter, should include some protective isolated cubby.

Access to resources: some infrastructure will, by necessity, have to be set up on mining sites, the proximity of which will be a selection criterion for the location of the colony. This concerns for instance the exploiting of ore, mineral salts or clay. However, regarding everything related to atmosphere and water, and the processing activities of these resources, integration of facilities in the immediate vicinity of the colony will be preferred for reasons of convenience of access and safety. Distribution of fluid resources (air, water, possibly warm water) and energy (electric and thermic) should be considered right from the inception of the overall design, because these infrastructures represent a significant share of the cost of equipment and maintenance. In the same spirit, the recovery of effluents and waste, so crucial to the colony, will have to be provided by networks serving the recycling units integrated in the overall architecture.

Production infrastructures (physical and intellectual): they will also have to be integrated as harmoniously as possible into the rest of the colony.