3.2 Features and types of location of pressurized modules

Some of the constraints listed above are instrumental in the design of the colony, particularly regarding the type of conceivable pressurized shells and their location on the planet. The need to contain pressure and the wish to alleviate radiations will lead to a limited number of basic solutions.

The surface module shells will have to be either:

The shapes of the buried parts will be exposed to fewer constraints (pressure being taken over by the regolith cover). The larger the dimensions of these structures will be, the thicker the shell will have to be (knowing nevertheless that the layer of protective material can contribute to counter the pressure effect albeit at the expense of structural safety in case of accidental depressurization).

The anti-radiation covers will come in the following forms:

The latter solution could be useful for greenhouses with natural lighting, since the risk of crops being possibly destroyed by solar storms cannot be discarded. A layer of about thirty cm thick may be sufficient but it could be thicker in case we want to use it for pressure compensation (this could be more easily considered for a normally uninhabited module).

Still with the concern of getting safety against the radiative environment in mind, the possibility remains of setting up the colony in a place providing a natural shelter: 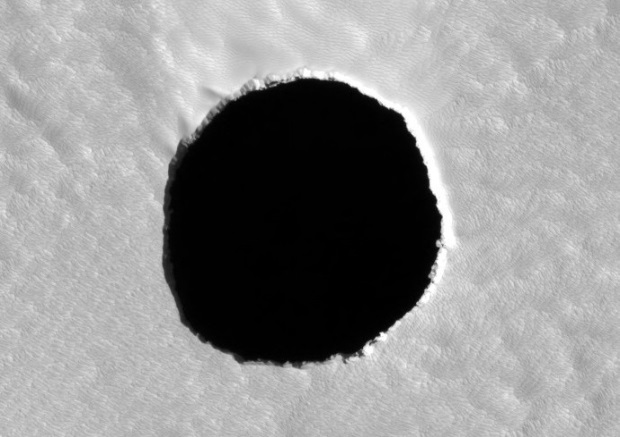 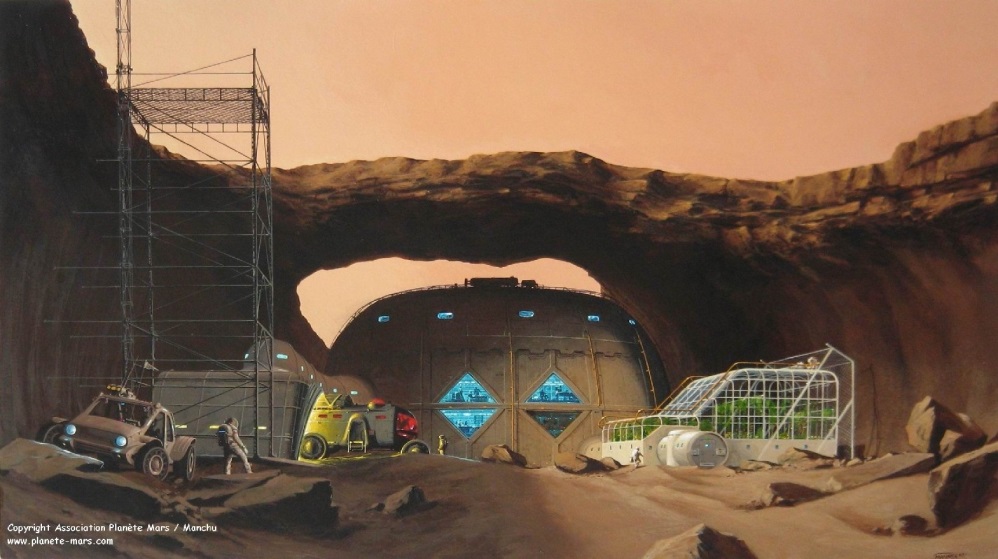 Base set up under a natural bridge in a collapsed lava tube. (doc. Assoc. Planète Mars / Manchu)

Taking advantage of the terrain features is definitely a great idea. It should not be however at the expense of mobility within the colony (lava tube case), nor at the expense of an easy access to the external environment, including the astronautic area (case of a canyon or a cave!). The location at the foot of a stabilized slope, facing properly cleared extensive grounds seems from this point of view the least constraining solution. This slope may also present a moderate declivity; it might just be the eroded face of a terrace as there are so many on Mars, stacked by the hundreds into countless sites.

To realize these bases, it will be necessary to build them by producing and handling the constitutive parts with machines and equipment which, mostly, will have to be imported at great expense from Earth and which therefore will be of limited size. Besides, the labor load in EVA7 conditions (wearing spacesuits) will strongly depends on the kind of implantation chosen; it is much easier to align on the ground and connect prefabricated cylindrical modules (before covering them with regolith), than tunneling (or digging tranches) in a hill (there is no extended research on excavation and handling).
The result will be building networks of multiple standardized cells, relatively small, rather than large domes or warehouses. By the way, this type of development is optimal in terms of safety since it limits the space to segregate in case a depressurization occurs by accident. Naturally, these networks will themselves have to be all interconnected, so that it be possible to move from one module to another within the colony without having to go outside. Nevertheless, it seems difficult to deprive the colony of some larger places dedicated to socialization (domes, large galleries).

3.3 General layout of the colony

Urban planning considerations will be of great importance given the living conditions of the inhabitants:

Despite these conditions, residents will need to get the availability of a complete range of services: they should lack nothing and should find in public areas the ambience and diversity allowing them to get rid of the enclosure feeling. Urban planners and architects will have a beautiful ground to exercise their talents. They will however be subject to limitations imposed by the fact of building on another world: maximum use of local resources, drastic saving of a limited workforce, necessity to work on construction sites wearing spacesuit, specific security constraints related to the environment … we might as well say that their creativity will be seriously constrained, or, seeing it positively, that it will be strongly stimulated!

6 Important cliffs present instability risks. The slope of stabilized cliffs is limited to just over thirty degrees.
7 EVA: Extra Vehicular Activity: activity outside the ship (or the habitat).

We can imagine two main types of general layout:

This second solution is probably more rational in terms of communication.

In any case, since we should expect a gradual development of the colony, with construction resources (material and human) under strict limiting constraints, we are condemned to follow a network or grid pattern of a large number of modules of relatively small size, and consequently to an arrangement preferably based on “linears”. The building of larger modules, whether domes or cylinders, presents serious difficulties of means, either regarding the manufacturing of elements or the handling and assembly in the open air. Note also that such structures have low efficiency in several respects: volumes occupancy coefficient, quantity of atmosphere to provide, shell thickness … Nevertheless, it will be necessary to provide for a few of them in order to avoid giving the colony the monotonous aspect, asocial and depressing, of a series of identical modules. Both views hereunder, are representative of concepts which have been published. 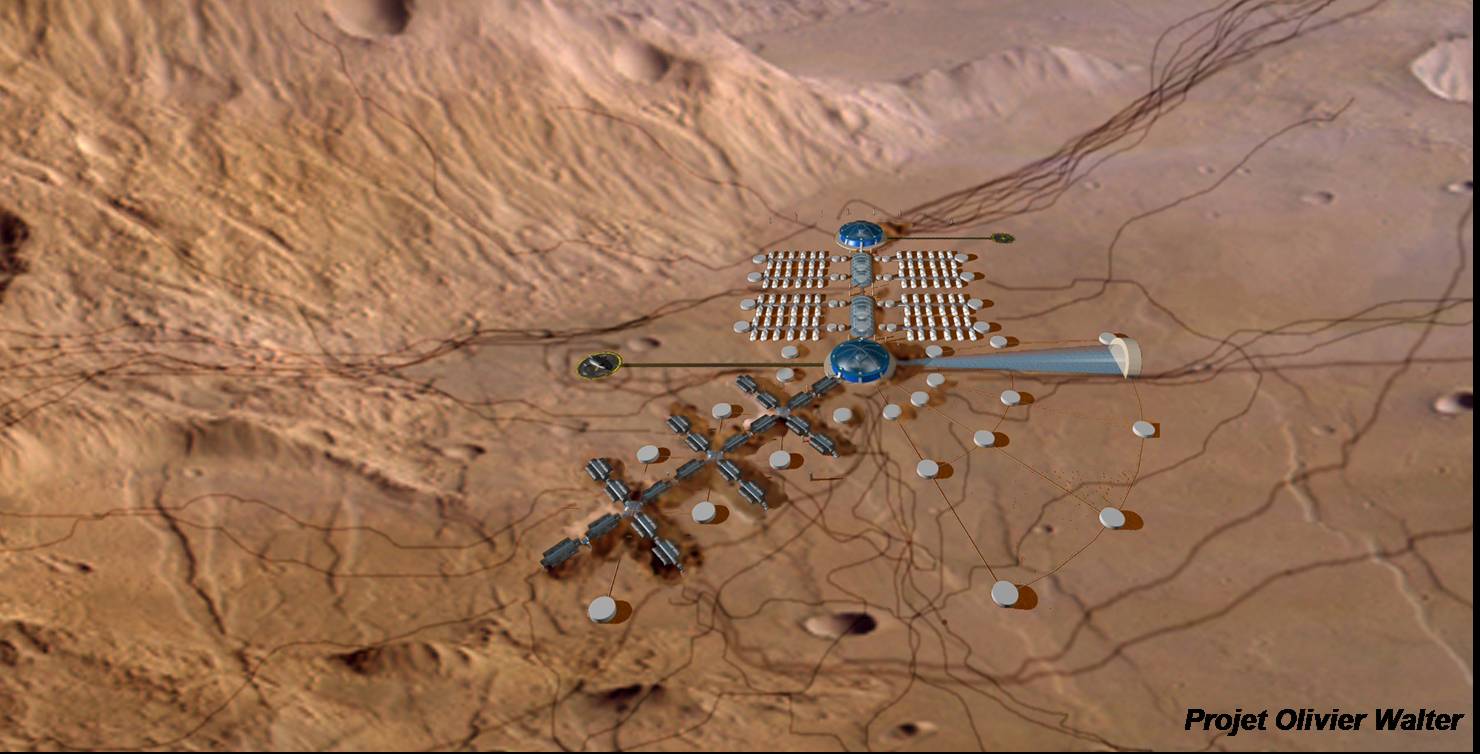