2. Mars, a privileged location for a space colony

The Prospective 2100 working group on the Future of Mankind in Space has identified three locations where to materialize its reflections:

The study of these three cases does not address the question of the purpose, and particularly of the activities to be exercised by settlers. It is obvious that the choice of location of the settlement will depend not only on the habitable conditions but also, and essentially, on the nature of these activities. But we considered that treating the whole matter would require making too risky and highly questionable assumptions; we preferred to stay with the most objectifiable aspects of the design, of the modalities of implementation and of the operating conditions of the colony. Naturally the features of its location (“climate”, gravity, accessibility, resources) play a major role in all these aspects. We’ll draw a picture of them as far as Mars is concerned. 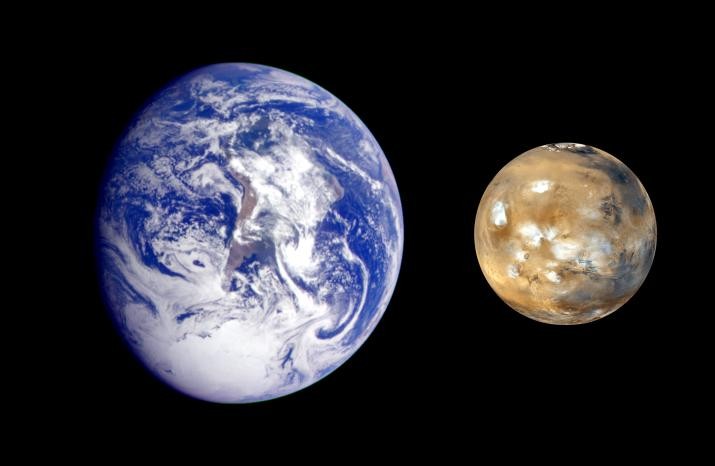 The planet diameter is about half that of Earth, so that its surface is four times smaller, roughly the total area of Earth continents. This gives an idea of the vastness of the territories offered to scientific exploration, exploitation of resources and establishment of a colony.

The surface gravity is 0.38 times that of Earth, inducing a circular orbiting speed (at 300 km from the surface) close to 3.5 km/s (versus 7.7 for the Earth and 1.5 for the Moon). For once the Moon does present a real advantage over Mars but a ΔV of 4 to 4.2 km/s (including gravity losses) is not much, even for a “conservative” oxygen – methane technology engine, given that the propellant will be produced in situ. 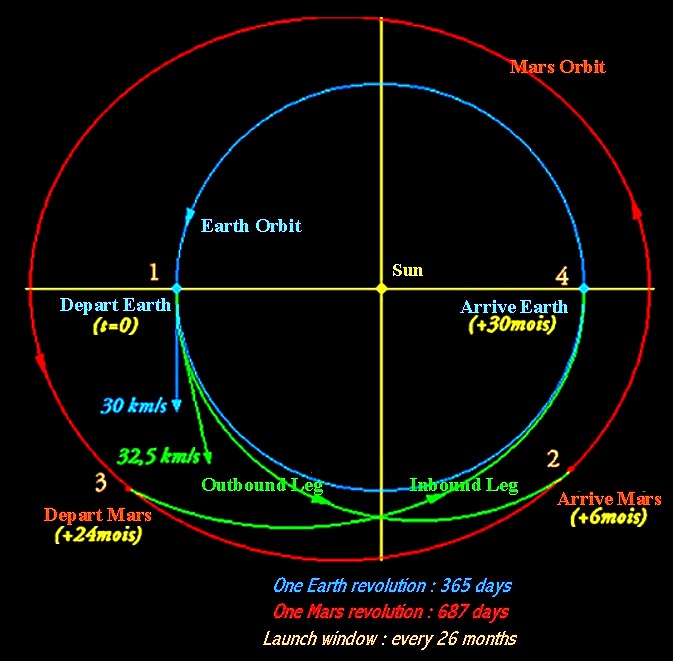 Mars is farther from the Sun than the Earth, moving on an elliptical orbit with a perihelion of 1.4 au (au: astronomical unit: average distance between the Sun and the Earth, 149.6 million km (8min18s light)) and an aphelion of 1.7 au, which makes it come closer to Earth at distances ranging from 56 to 100 million km, depending on the position of the planet on its orbit at the time of the opposition (configuration when the Earth is between the Sun and Mars). Opposition occurs every 26 months and perihelic opposition (when Mars is near its perihelion) every 15 years. The favorable launch windows (minimal energy transfer trajectories) therefore occur every 26 months; and practically, even imagining futuristic engines with very high specific impulse and small masses, overcoming the cyclical nature of the opening of these windows will remain impossible; we may only hope to widen them. Note also that from one opposition to the other, the amount of energy required for the transfer vessels varies since the “shortest” distance changes.

The presence of an atmosphere (see § 2.2) gives a considerable advantage to Mars as far as astronautics is concerned. Indeed, although pressure at ground level is low, it provides a medium the density of which is enough to allow aerodynamic braking maneuvers (all the more than the reduced gravity of the planet induces a larger atmospheric thickness than around the Earth). Possible maneuvers are aerocapture, circularization through aerobraking, breaking the orbital velocity in view of landing, then descending under a parachute into the lower layers. Propellant gains are critical to the overall mass budget of a Martian space transportation system, even though the process is not completely “free” since aerodynamic shields (and parachutes) are needed. The presence of an atmosphere makes it energetically less costly, propellant-wise, to travel from Low Earth Orbit (“LEO”) to the surface of Mars, than from LEO to the surface of the Moon!

The first one is the presence of its satellites, Phobos and Deimos (Phobos, the largest, has a diameter of about twenty km and a gravity of 1/1,000 g). Given their negligible mass and the possibility of using the Martian atmosphere for orbital capturing of a ship coming from Earth, these worlds are the most easily accessible of the solar system in terms of total ΔV, for a return trip from Earth orbit. Even though their composition – surficial and internal – remains unclear, they could therefore provide mineral resources without match and also, depending on their water content (ice or hydrated minerals), hydrogen resources transferable at the lowest energy cost into near-Earth environment. 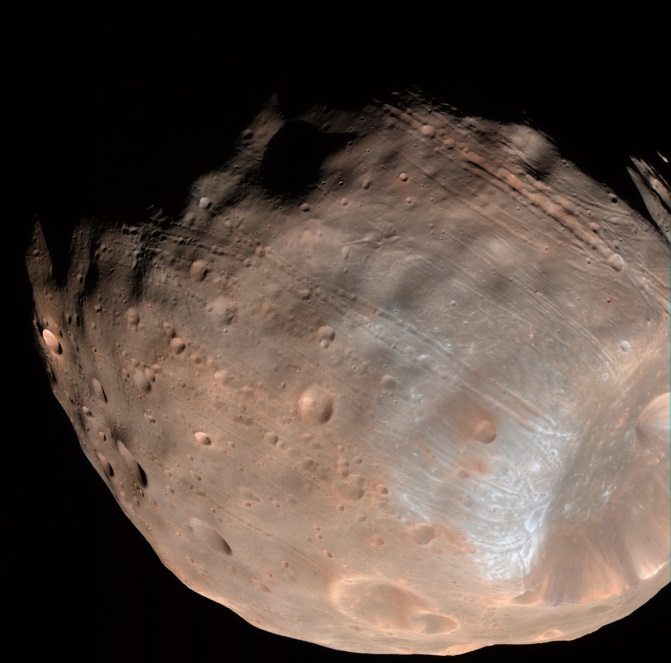 The second one is its relative proximity to the asteroids belt where some futurologists see a hoard in terms of mineral resources which could be used by some heavy space industry and even for the benefit of the Earth as far as the rarest metals or the ones most likely to become rare are concerned. Rhodium which is in high demand for the manufacturing of industrial catalysts and is exceedingly rare, could be one of them. Stations on the asteroids could be supplied preferentially from Mars with propellant, water, food, construction semi-products, and labor rotations could also be made from the Martian colony.

As we see, in spite of its distance from the Earth’s environment, Mars offers many advantages as far as interplanetary travels are concerned.

Note that being far away does not imply any energy handicap (on the contrary we saw that, from this point of view, it is less costly to reach Mars than the Moon), but does imply long travel times, typically 6 months with current technologies. The consequences of these time spans on medical, psychological and flight safety must be taken into account for the design of the vessels.
However, the development of very lightweight nuclear power generators (a few kg per kW, versus 25 presently) could allow, within a few decades, to reduce the journey down to three months, thanks to high power electric propulsion.