This is the most important basic resource for the colony (see section 4.5). Indeed, it will not only be used as such for human use and greenhouses, but it will also be the source of hydrogen and, at least partly, that of oxygen. It will also be used in some metallurgical processes.

Fortunately, as we saw in §2.3, there is plenty of water on Mars, mostly as ice in the ground (right from the first meter!); plenty but nevertheless requiring powerful equipment to collect. For climatic and astronautical reasons we can also make the hypothesis that we will establish the colony at a latitude lower than 50°, therefore in an area containing water but only to a limited extent; within the vast equatorial areas it remains possible to choose a site the immediately accessible subsurface of which (from the first meter) would contain between 6 and 10% of water (in terms of mass).

We estimate the needs of water to be between 36 and 24 mT/sol, depending on whether all the oxygen is, or not, produced by electrolysis. Making the assumption of a recoverable proportion of 6%, the soil mass to be treated would be 400 to 600 mT/sol, i.e., assuming 8-hour work per sol, from 50 to 75 mT/h, or, assuming a density of 1.5 mT/m3, a volume of 33-50 m3/h. Such a volume may be dug and carried by one or two trucks of moderate size. In terms of handling, the quantities are quite manageable.

There is one question left: what is the consistency of a soil containing 6 to10% of water ice? Once the anhydrous surface layer has been scraped, don’t we risk hitting permafrost, which would require powerful drilling tools (jackhammer, explosives?). A priori, with percentages of this order of magnitude, the answer is no. At a minimum, it seems useful to provide for fixing a percussion tool on the mining machine, in order that it could jolt and split duricrust as well as rock plates. At the processing plant, this raw material should be reduced to rubbles in a crusher.

The extraction of water would be done by heating at a temperature of 350 ° C in an oven which will allow extracting the precious liquid, by evaporating and condensing. The most suitable method for this treatment seems to be microwaves heating. Indeed, once fragmented the soil has a low thermic conductivity, making it difficult to heat; however, under this form, energy would directly be coupled to water molecules. The quantity of heating energy is assessed, according to sources, to range between 12 kWh/kg (assuming, we have to say, a water content reduced to 1%) and 3.6 kWh/kg of water. Taking a median value of 6 kWh/kg, the power required would be 6 MW for 24 mT/sol. This item represents 10% of the total power generated for the base (excluding power for greenhouses lighting).

A major advantage of Mars as a choice of colony implantation site is that, with abundant water resources, it ipso facto has access to hydrogen.

Hydrogen will be obtained by electrolysis of water extracted from the ground. Its thermodynamic energy balance is 240 kJ/mole, which should be increased on account of electrolysis efficiency (0.65). The computed need of 770 mT/year gives a power of 4.5 MW.

About one third (220 mT) of the hydrogen produced, dedicated to the fueling of the shuttle, could further be liquefied, which represents an energy expenditure of 28 kJ/mole, and a power close to 100 kW, not significant with respect to electrolysis. The remainder, to be used for the synthesis of methane, will stay in a gaseous phase.

Two processes are conceivable for producing oxygen: electrolysis of water extracted from the ground or thermic decomposition of atmospheric CO2.

The production of hydrogen by electrolysis allows in any case getting some of the oxygen requirement as a “by-product”. 6,150 mT of oxygen correspond to 770 mT/year of hydrogen; the additional 3,850 mT, which is 10.5 mT/day (10.8 mT/sol), would have to be produced separately. 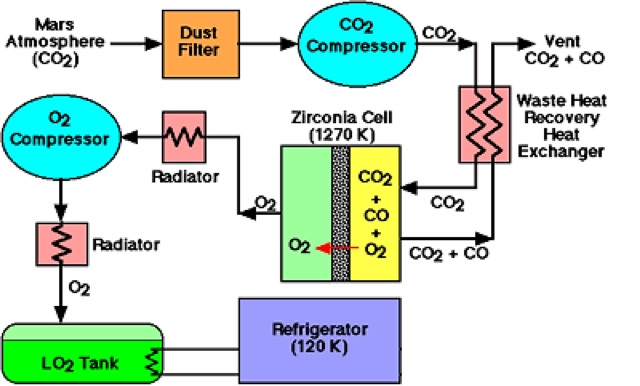 In case all the oxygen is produced by electrolysis, the need being 27.4 mT/day (28 mT/sol), the corresponding water consumption should be 11,250 mT/year, or 30.8 mT/day (31, 6 mT/sol). In this case, we would get a hydrogen excess of 480 mT/year from which we could draw for chemo syntheses, especially for the production of polyethylene, a base for plastic materials.

If we limit the use of electrolysis (and therefore the need for water) to only what is necessary for the production of hydrogen, 10.8 mT/sol are left to be produced by thermic decomposition of atmospheric CO2. This option presents the advantage of reducing by one third the water demand of the colony (from 36 to 24 mT/sol), and the need for energy dedicated to the corresponding extraction (from 9 to 6 MW).

The method consists in drawing air by suction and compression at 20 bar, then cooling it. This would allow liquefying CO2, while segregating nitrogen and argon (other significant components of the atmosphere). The choice of a pressure of 20 bar allows liquefying and keeping the CO2 in a liquid form. This CO2 is broken down in a furnace at 1,000 to 1,100°C, the CO/O2 mixture is then segregated using zirconium membrane cells which have the property of letting only the O2 molecules pass through it. Liquefying oxygen is what is just left. Carbon monoxide which in principle should be released to the atmosphere, will nevertheless be used in some chemical synthesis (urea) or metallurgical processes, particularly for the manufacturing of steel (see §5.6.4). We could also consider using it as a fuel instead of methane, but with a much lower energetic value and storage safety issues (deadly gas for Man).

There is indeed another CO2 capture method, by adsorption on a zeolite bed exposed to cold open air (overnight) and then heated in a closed room (during the day). This method of capture is more energy efficient but unsuitable for the high flow rates that are needed here. The airborne dust will have to be carefully filtered if we intend to give a long life span to separating membranes.

In terms of energy balance, the two methods do not differ substantially: 740 kJ/O2 mole for electrolysis (yield of 0.65 included) versus 566 kJ/O2 mole for thermic decomposition. However, we should also take into account the extra power consumed (3 MW) for extracting water in the case of electrolysis.

Methane, an excellent propellant for rocket propulsion, a compact energy carrier and easy to use for planetary motorizing, can also be very easily synthesized on Mars. The process, known in the chemical industry for over a century, is the Sabatier process, based on the (exothermic) reaction:

In the following typical conditions: temperature close to 300 ° C (i.e. moderate), pressure of 1 bar, in the presence of a ruthenium/alumina catalyst, we get an excellent reaction yield (94% conversion).

CO2 is drawn from the atmosphere in the same way as for the production of oxygen by thermic decomposition. The power required for the estimated needs of 6.2 mT/sol is 1.3 MW, of which approximately 1/3 for compressing the atmosphere. But note that heating at 300 ° C, a moderate temperature, may be obtained by directly using the thermic energy of the power plants. 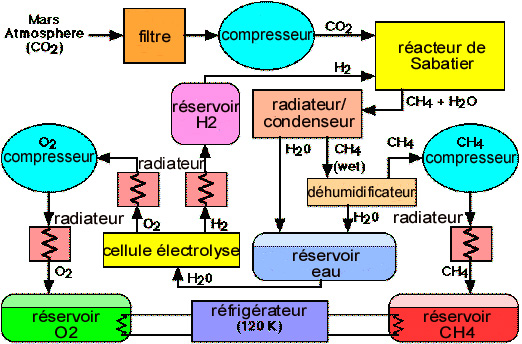 An important point should be emphasized: basically, the Sabatier process can be extended, by way of a change in the operating parameters and of the catalyst, to the synthesis of other organic compounds in order to improve either the thermic stresses of storage (under liquid form) or the density, while not significantly degrading the energy and propulsive performances.

Regarding the use for rocket engines, if the principle of surface to orbit shuttles carrying liquid hydrogen (for the ascent leg) and liquid oxygen, is accepted, the choice of methane (used in small quantities for the descent leg) should impose itself, given the performance gain it offers compared to other possible fuels (except, of course, hydrogen).

The Martian air, as we noted in §2.3, holds 2.7% nitrogen (also 1.6% argon). Nitrogen may thus be obtained as a byproduct of the production process of methane and oxygen using the thermic decomposition pathway. Liquefaction under 20 bar of captured CO2 allows to naturally segregate the residual atmospheric gases. This mixture is suitable for the most important application in terms of volume, i.e. the feeding with buffer gas of the pressurized modules, as pure nitrogen is not needed. For chemical synthesis applications of nitrogen products: fertilizers mainly, but also, if necessary, explosives (ammonium nitrate), the presence of argon is probably acceptable given its chemical inertness.

Many fertilizers can be synthesized from ammonia, itself easily obtained by direct reaction of nitrogen with hydrogen at low temperature (exothermic reaction, 46 kJ / NH3 mole). Ammonia with oxygen allows the production of nitric acid which, in the presence of carbonates (the presence of which has been recently revealed by Phoenix), can yield nitrates. It is also possible to produce urea by reacting ammonia with carbon monoxide. The synthesis of ammonium phosphate and superphosphate poses no particular problem. Once cultivation process has started, the nitrification of soil will also come from plants life, in symbiosis with bacteria that can fix nitrogen.